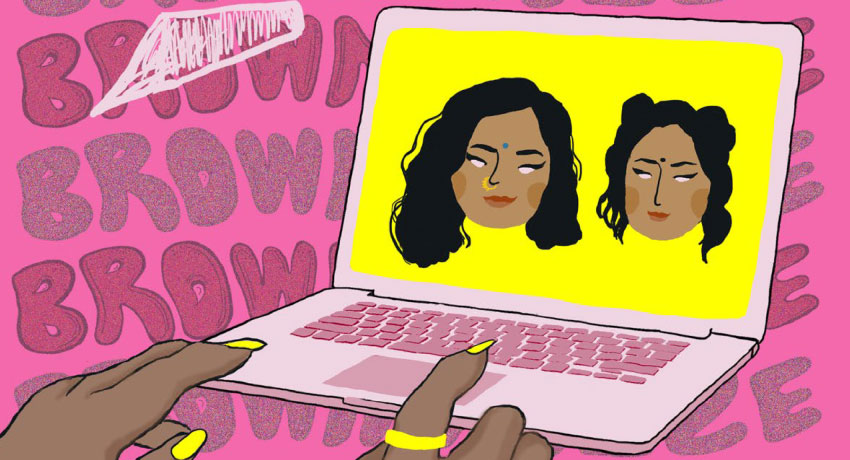 Hey Natalie and Gemishka, so tell us a bit about yourselves!

Gemishka:Originally from South Africa, and moved to New Zealand when I was 15 years old. I studied film and media studies at The University of Auckland, and now work as a freelance videographer and production manager. We meet in high school Macleans College and we kept in contact since then. We got together when she had the idea for Brown Noize.

Natalie: That was 10 years ago. We’re closer to death than we thought! So we went to a really white high school where they make you wear kilts. From there we knew, we were the few brown girls in an all white school who were self aware and didn’t want to blend in or assimilate. We were unapologetically ourselves the whole time which is why we were close and stayed in touch. I went to Radio College after high school. We talked about representation and discussed a lot of issues relating to people of colour all the time because we had the same taste in films and tv shows. I talked to Gem about a web show or even a tv show. We had big dreams and ambitions about pitching to TVNZ or Comedy central and making a million dollars!

How did the idea for Brown Noize come about?

Gemishka: There wasn’t any show that reflected our stories, and our lives on New Zealand screens. There was no reflection of our reality on TV, so we decided to do something about it.

Natalie: Broad City was a big inspiration especially being 20 somethings who are just trying to get by in life. They’re flawed women who are doing stuff. Even with other TV shows realised there was nothing like the immigrant child’s perspective on television. I decided to create something with representation that not just shows our perspective but the perspective of people who aren’t normally represented in media and important social issues. We had to break cultural divides in bringing our idea to life. Like in Broad City there was an acceptance of women being sexual beings was also a great part of the show. Illana is sexual but in an empowering way. So we also want to show women of colour being seuxal creatures because we are, without stigmatising it was also one of the things we wanted to show. I called up Gem with my idea who had studied film and it all went from there. We also had other inspirations such as Bollywood. Even though it’s extremely sexist we wanted to incorporate more bright and colourful clothes and show that we’re not just stereotypical Indian women wearing sarees.

Why do you think Brown Noize is an important project?

Gemishka:It reflects the perspective of many people of colour living in Auckland, who don’t have any representation of themselves on New Zealand television screens, but also internationally as well, which is astonishing in 2018. It is important because we want to show New Zealand-Indian and other non-represented characters as real people rather than stereotypes in adverts and side characters. And we hope that this can make the rest of new zealand accept all ethnicities as part of their culture.

Natalie: But also with the climate at the moment, the immigrant perspective has become more relevant than anything. As well as the topic and importance of representation.

What barriers have you had to overcome?

Gemishka:The lack of funding opportunities that are available for people like us, but also for young and hungry filmmakers. However we did receive a lot of support from BSAG (Brown Sugar Apple Grunt) Productions, and other creatives who support diverse voices.

Natalie: People also not understanding that this is not just a web series but a mirror to society and the actual hardships people of colour face on the daily. Also it’s about representation and acceptance were trying to get in society.

Gemishka:There were also cultural barriers that we had to overcome in our own lives and with our project. Like with our families saying “What will people think?” and those kinds of thoughts and opinions.

Gemishka:Growing up in South Africa, and moving to New Zealand, was a huge cultural shift for me. Living in New Zealand, after my parents had lived through the apartheid, I realised how important it was to take pride in my culture, and to stand up for my cultural roots.

Natalie:I was born and raised in New Zealand my dad’s Malaysian-Indian and my mum’s Fijian-Indian. I’m currently a stand up comedian and work part time at NZME. Growing up with immigrant parents and trying to adapt to the Kiwi way, I essentially had two worlds that I lived in. Which is one of the reasons Brown Noize exists.

What is your experience like being people of colour that are also artists/creatives? Is there any guilt or fear you experience?

Gemishka: There is definitely guilt for pursuing this industry at times. Only because I know how much my parents have sacrificed for my education. But we feel that we have something to say and that’s what drives us to keep going. It was not an easy career to bring up with my parents. Of course, telling them that I wanted to be a doctor, or a lawyer would have made them extremely happy. My parents did want me to get a degree, so I guess we both compromised and accepted each other, which took a while for them to get used to the idea that I was following a creative career. It’s definitely not a traditional career for an Indian woman, and there isn’t anyone else in my family who is creative.

Natalie: Being an Indian woman pursuing any sort of creative field is a rebellion in itself. I have struggled for a while with my family not understanding or approving with me and my creative work but at the same time the purpose of Brown Noize is bigger than me trying to get approval of my family it’s about representation it’s bigger than really both of us but in the best way.

What is the best way to support your work?

Gemishka:Follow us on social media, keep sharing our episode and videos, and tell your friends about our show. Keep spreading the noise. And if there are similar experiences you’ve gone through we would love to hear them.

Natalie:Liking and sharing our content social media is where Brown Noize is right now and with the help of people spreading our social media we can hopefully get funding. Also people telling us about their experiences it’s what inspires us.

Will getting funding be your main goal?

Gemishka: Yes, it’s a necessity for supporting our team, and it will help us take the web series to a great quality, and further in the media.

What are some films or tv shows that you can recommend to people reading this article?

Natalie:Po and Tenjal – Its a bloody hilarious sketch comedy series on Youtube made by two extremely talented creatives, it talks about their experiences as an Indian and Chinese man. Kanjivaram is another older Tamil movie that is brilliant!

Gemishka: Broad City is obviously one we have to mention because that’s where our inspiration comes from for Brown Noize.

Natalie: Our inspiration also doesn’t just come from TV shows or movies, we take it from music and instagram artists that we follow. One of them is MIA the rapper and her style/general aesthetic and artists like hatecopy on Instagram. Also old school Bollywood movies.