Guest column: On Forgetting Your Manners; Or, a Nation of Feckless Cunts 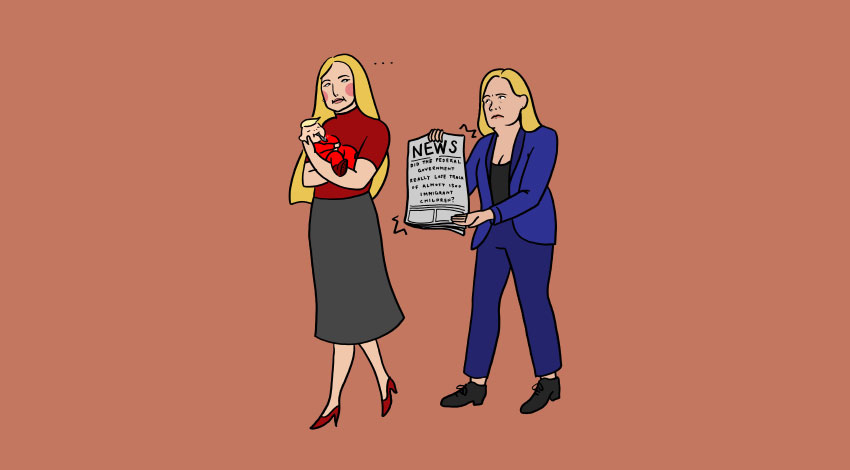 “I would like to sincerely apologize to Ivanka Trump and to my viewers for using an expletive on my show to describe her last night… It was inappropriate and inexcusable. I crossed a line, and I deeply regret it.” – Samantha Bee

More New Zealand than loving rugby and underfunding the arts is hating America. Even the very stupidest Kiwi (and if you want proof let me direct you to any sports bar, or any collection of Young Nats) will gladly opine on the profound stupidity of the Americans, they’ll show super legit YouTube videos where Americans can’t locate France on a map, and think that Australia and New Zealand are North and South Korea. It’s got something to do with tall poppy syndrome, I guess. It has something to do with a class-anxious obsession with our colonial parent; we have some weird idea that the English are sophisticated (have you seen them turn out for the royal wedding? Classy?) and the Americans are gauche (have you seen Remuera, or Dr Rudy’s? Or the Young Nats? And the Americans are gauche?). And Trump is great for the New Zealand psyche because he proves, conclusively, that the Americans are dumb, and gauche, and totally out of control and weird and hick and backward. Unlike us, we’re classy you see.

And with this in mind, writing an America-bashing article (just wait) feels sort of gross. It isn’t heterodox or edgy to sit in Auckland and whinge about a country with a functioning literary culture, and the fucking New Yorker. Yet, tin-potted and gross and small and boring and parochial as we are, we have something going for us. It isn’t our smarts, no it definitely isn’t our smarts. It’s our lack of manners. Fucking shit we’re rude. I swear constantly. I use the word fuck at the dinner table, at nice restaurants, in Craccum articles, in tutorials (Paula Morris eventually asked me tone it down about four fucks into a workshop last semester), around old ladies, and at the Young Nats (who suck, btw); I’ve very publicly called Mike Hosking a dry-dick and a shitlord. Every now and again someone looks offended, to which I respond: fuck you. I definitely say shit (barely worth making it bold), and bugger. I don’t generally use words like f****t or n***r, and definitely not s**t but that’s mostly because it upsets people less straight and white and male than me and seems like it becomes an ethical thing more than a manners thing; but for the most part I could get away with it if I wanted to (I’m pretty sure the editors, context dependent, might have let me publish those sans *). Probably the only word in my regular lexical rotation that I’ve actually had to defend has been the word cunt. Which, I’m sorry I do and will use, and I’m not sorry. And I’m not talking about baby-boomers, I do not give a shit what house-owning-pension-getting-welfare-cutting-arts-hating-cunts get offended about, but real people, women-type people. The argument goes that there’s no male equivalent, and it’s a word used especially and aggressively to demean women. There’s merit in that argument, and mostly the compromise we come to is just not to call women cunts in anger, which makes sense.

But here’s the point: the only words I cannot say in New Zealand society, even fairly polite New Zealand society, are words that have some kind of ethics attached. Ethics-words, like N-, S-, F- (not fuck to be clear, which I’ll never stop saying) and, possibly cunt, all have these messy and oppressive contexts and saying them when you look like I do and enjoy all the privileges of like never being judged for my race, and never (Family Bar aside) getting groped or cat-called or s-shamed, is sort of mean and hurtful but more importantly would be somehow taking agency or something away from people those words are actually weaponised against. And I’m saying this not because you don’t know, and not (not only) to justify my awful awful language by virtue signalling, but because my point is that even those ethics-red-flag type words are actually sayable in New Zealand, just not by me. So if, for instance temporary co-editor Caitlin Abley wanted to called temporary co-editor Samantha Gianotti a big s**t then she could, of course.

The word cunt in New Zealand is a bit complex because it’s just so useful. Other than reclamation or hyper ironic jokes from identity group concerned the S- and F- type words have no real use. Cunt however has many wonderful uses outside of being awful to women. Mike Hosking, for instance, isn’t just a jerk (or a dry-dick or a shitlord) he’s a cunt. Stuart McCutcheon isn’t only a neo-liberal stooge and hypocrite and total bore, he’s a cunt. Young Nats aren’t just spoiled pompous virgins, they’re cunts. See, it’s useful and apposite and feels so good to say (or type). Every now and then I get myself into trouble when the potential oppressed group crosses over with the emotionally-accurate group: e.g. I might get in trouble for calling Paula Bennet a cunt (even though it’s true), but that’s for potential moral dodgyness (and even then I’d only be told off in certain fairly small circles).

Now the Americans, despite their gaucheness, are actually polite. Weirdly, disturbingly, hypocritically, body-politic-poisoningly polite. What, I guess, was the pseudo-aristocratic so-called ‘high WASP’ style of American politics—senators and supreme court judges and presidents were posh and well-spoken and pillars of the community and had beach houses and went to expensive prep schools and read Latin and wore tailored suits—has hung around. Look at Obama, look at Clinton. And yes Trump seems to throw all that out the window, what with his pussy-grabbing (is ‘pussy’ a swear word? Do I need to make it bold?) and bullying and name calling and outrageous sexism and racism and his implications throughout his campaign that Mexicans are rapists; but he relies on it himself.

For instance, Samantha Bee, the least popular and most funny of the commentator-comedians, while discussing the US-executive’s removal of children from their parents for deportation, dared to call Ivanka Trump a feckless cunt (I choose not to put the phrase in quotation marks because I’d like to claim it as my own too) while saying she should tell her dad to get a fucking grip. Now, one might think this would get a laugh, in NZ it certainly would. Let’s also remember Ms Bee is a woman, and so she isn’t being sexist (the way I might be accused of when I note that Ivanka is a cunt). But instead, none other than pussy-grabbing racist Donald Trump, along with the entire conservative media, round on her for… her language. Quick reminder: children, toddlers, removed from their parents, kept in cages; including the children of legal asylum seekers (not that it should matter). Children of border-hoppers torn from their parents for the ‘crime’ of hopping the border in search of money (let’s also remember the state of California’s economy is built on illegal labour) or a better life or that nebulous and fraudulent thing called the American Fucking Dream. And on top of that, children as young as three are being asked to appear in immigration court sometimes without an attorney present. Look it up. It’s shocking and offensive and insane and makes me fucking apoplectic with rage. And then, then, even liberal stalwart Slate, on their culture podcast, had a discussion about the use of the word cunt and all of the hosts agreed it was out of line. They recognised of course it isn’t as bad as the President. But still, naughty, naughty word.

After a deluge of rage and criticism, mainly from the right who reckon a female comedian saying cunt is a bridge-too-far, Ms Bee actually, get this, apologised. See the quote above. And then, one of the most feckless of all cunts, Sarah Huckabee Sanders, the Goebbels of the Trump administration, was refused service at Red Hen. Well, this of course sparked a debate about whether this was the equivalent to refusing to make a wedding cake for the gays. And sure enough, the right were outraged, but the left were pretty hand wringy, lots of concern about this behaviour, Slate noted that while it was satisfying to deny people like SHS service, it wasn’t politically virtuous.

To be clear: this is the propaganda minister for a political regime perpetrating a form of race-based child abuse, and the media is discussing whether or not throwing her out is appropriate. Fuck that. Yeah, I know, rights, non-discrimination for political beliefs. But: race based child abuse is not a belief it’s an action. Refusal of service or using the word cunt does not compare.

I don’t like my country. But at least we forget our manners. That’s what sets us apart. Let’s remember to forget.