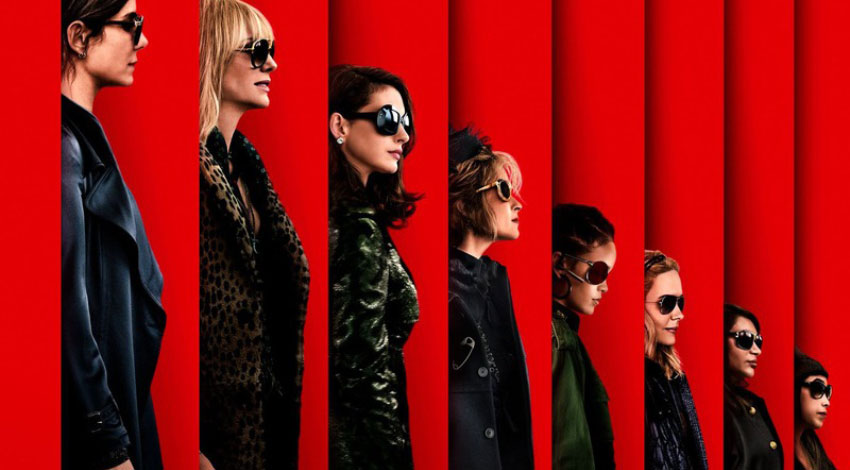 Put on your heat-proof-goggles ‘cause this is about to be a hot take: this movie is like a lesbian dream that somehow became reality.

Seven crazy badass, crazy hot ladies committing well-planned organised crime that only hurts rich companies and a sexist guy? Anne Hathaway is also there? How do I get some Google glasses that only have the ability to constantly play this movie on top of everything else I interact with in the world?

Ocean’s 8 carries on the noble tradition of 2016’s Ghostbusters: Answer The Call (another lesbian dream) as an all-female reboot of a successful Hollywood franchise. Unlike Ghostbusters: Answer The Call which is basically an alternate universe version of Ghostbusters in which the dude ghostbusters don’t exist, Ocean’s 8 is set in the world of the original George Clooney/Brad Pitt love trilogy that was Ocean’s 11, Ocean’s 12, and Ocean’s 13. Sandra Bullock plays Debbie Ocean, the con-woman sister of George Clooney’s character Danny Ocean and though George Clooney does not appear in this film, it does feature two thrilling cameos from two of the lower-profile but absolutely iconic characters from the original films.

I was a massive fan of the original Ocean’s movies and this movie filled my heart with joy because it mirrored the core Pitt/Clooney BFF relationship of the first three movies. It also mirrored the key turning points of the story of Ocean’s 11 while having a very different plot, and the cinematography was somehow exactly the same as but also way less tacky than the very 2000’s flavour of the original movies. I don’t know how they did that. Imagine watching one of your favourite movies but now it has girls in it… praying hands emoji.

This movie has Rihanna in it. Rihanna. And Cate Blanchett. If you missed her in the video installation Manifesto at the Auckland Art Gallery, you definitely don’t want to miss this.