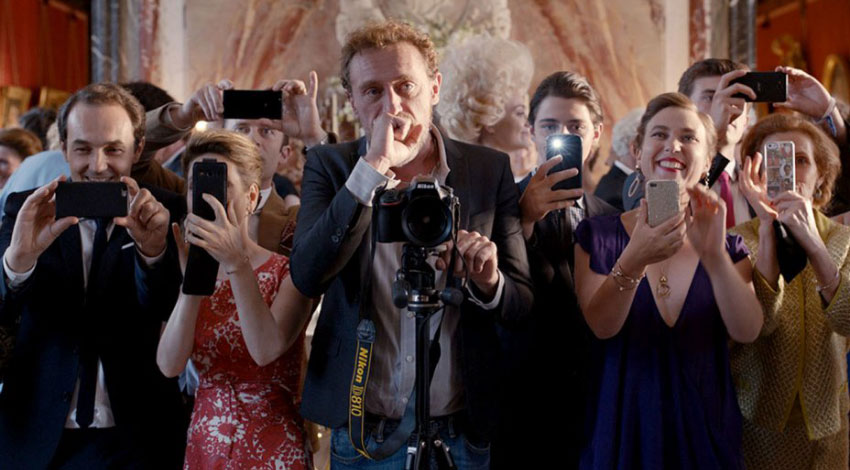 While French cinema has a reputation for pushing the limits of filmic taste, especially in depictions of horror and sex, C’est la Vie! is a comparatively classical comedy of errors. The real distinction of this film is the diverse characters the cast bring to life. Each actor delivers a remarkably naturalistic performance, whether it be an unlikeable boss, a brusque manager, a sleazy photographer, a demanding groom, or the myriad off-book workers who carry both the wedding and the film.

While the managerial staff panic and philander their way through the plot, complaining about the latest request from the groom or guests, the remainder of the staff pull together, usually off screen, to overcome each obstacle. While the protagonist is ostensibly Max, (the wedding planner, who opens the film berating a couple for trying to save costs on their wedding, who sees no connection between his open affair and crumbling marriage, who is secretly planning to sell the company, and whose birthday it is) the character’s egocentrism pushes away any empathy or sympathy; whenever things do go wrong it his employees’ fault, whenever things go right, he has miraculously saved the day.

This pattern of credit is eye-rollingly familiar. I kept waiting for someone to call out Max for his behaviour, to tell him that he deserved all the strife he had brought upon himself but I also knew that there was no character in the position to do so. In this way, C’est la Vie provides a rare commentary on the stratification of the working class. While not explicitly addressed, snippets of dialogue refer to the long hours, low pay, and lack of rights of these workers. Max refers to the impossibility of paying these people fair wages, that the industry is built on the backs of, but refuses to act on these problems, his own security enhanced by their suffering. While I am unconvinced it was the intention of the film, the undercurrent of exploitation makes it a unique comedic experience.