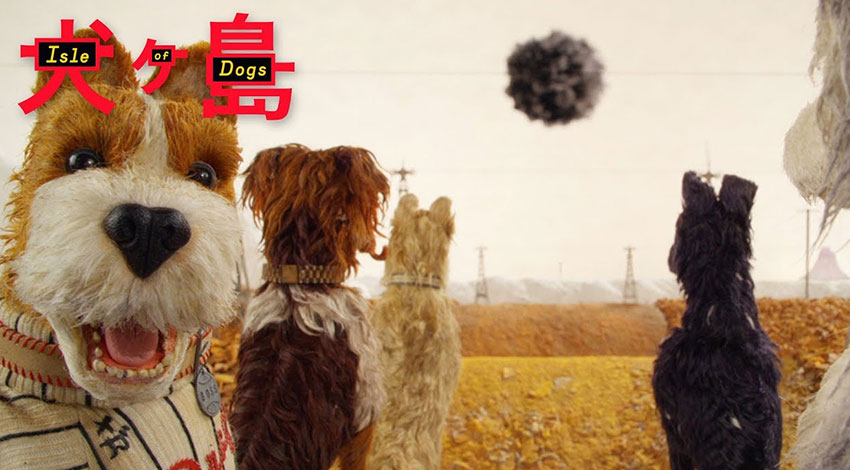 Yet another installment in the filmography of the belovedly quirky Wes Anderson has failed to disappoint. By this time our (generally meaning the arts-inclined university populous, whom Wes’ films seem both most angled towards and cultishly received by) expectation has become that upon leaving an Anderson film, several dozen smiles, giggles and joyous wide-eyed moments will have been acquired, purely from the delight of his unique brand of film making. Isle of Dogs may have outperformed even Moonrise Kingdom in this ambiguous yet fitting criterion.

Telling the story of … actually, forget the story. Basically: dogs expelled from future Japan, floating trash heap inhabited, kid comes to save dog, moral growth demonstrated, and importance of family reinforced. Yadda yadda. I don’t enjoy this director’s work for its storyline. Be confident that the plotline is heart-warming enough, but also that breath-taking narrative is absent here; this film’s genius is all style.

The characteristic most attention-grabbing is its stop-motion production. Having previously attempted the technique in his recreation of Roald Dahl’s Fantastic Mr. Fox, Anderson ditches that earlier installment’s awkward, forced feeling, leaving us a flowing, expansive epic that at points is downright spectacular. The clinically recreated motion and expressions of dogs, and in their lesser role humans, is exceptional and can be better appreciated by watching Fox Searchlight’s series of ‘ISLE OF DOGS | Making Of:’ videos on YouTube. The first instance of wind rustling the dogs’ fur genuinely chilled my spine. Partnered with Anderson’s near-iconic film-making style packed with tracking shots and fast cuts (both oh-so-well utilised within the literally boundless setting granted by stop-motion production), as well as symmetry and repeated colour palettes, the film is nothing short of a visual delight.

Anderson’s frequent workmates Bill Murray and Edward Norton return behind the mics as Boss and Rex, two of my favourite actors who both pack character into their performances, as well as Scarlett Johansson who hasn’t produced an acting performance I’ve enjoyed since Lost in Translation, but whose raspy tones perfectly suit her mysterious and charming character Nutmeg. This colourful cast deliver consistently clever lines in a performance fitting of the film’s visuals.

The film is topped off with Japanese motifs, my favorite of which are the trio who open and close the 1h 45’ playing traditional Taiko drums. Clever story-telling methods also find their place in Isle of Dogs, such as several cartoon sequences, an American exchange student’s narration and English-translated doggy talk (“all barks translated to English” flashes on the screen early on). These additions add interest, however an interesting piece by Nam Woon Kim in Craccum Issue 11 shines light upon the presence of possible anti-People of Colour ideology throughout the film to which these storytelling methods are party; issues I will choose to have no further comment upon.

To summarise the film in one word: Picturesquisite.