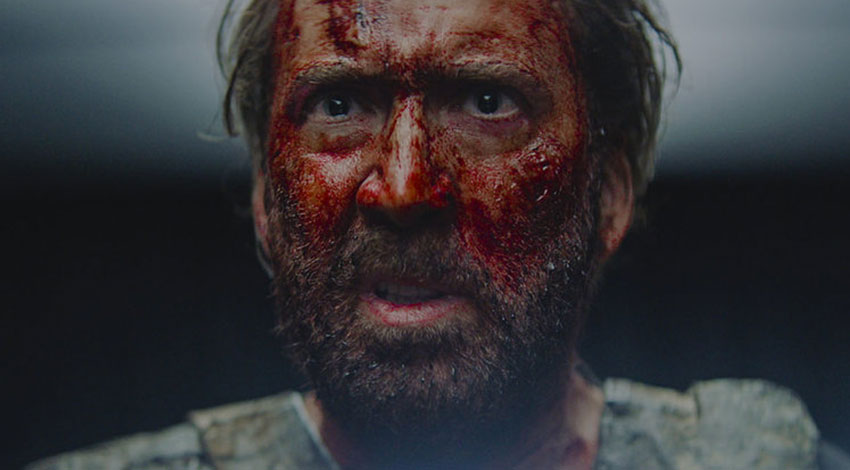 Mandy has a bit of a reputation. The original promotional image for this film – heavily used in promotional material put out by the NZIFF – was an extreme close-up of an extremely pissed off, covered in head to toe in blood, Nicolas Cage.

However, director Panos Cosmatos’ previous film, “Beyond The Black Rainbow”, while admittedly visually stunning, dragged on a bit. Cage, also, obviously, has a poor track record.

As a director, Cosmatos’ is clearly not preoccupied with character work; he deals mostly with visuals and with sound. This a totally acceptable list of priorities to have as a director – most of the people who will go see this movie aren’t expecting a character driven experience – but Mandy takes the better part of an hour to kick off properly.

It’s easy to become distracted – even bored – in that time, particularly if you came specifically to watch Cage murder the hell out of a bunch of people.

That being said: once the murdering does start happening, the movie immediately earns a reprieve.

The back half plays out like a best-of compilation of gory lo-fi kills from shlocky mid-eighties horror movies. Cage does, as advertised, spend most of the movie drenched from head to toe in blood. At one point he crushes a man’s head with his bare hands. At another, he shoves an axe through a different man’s mouth. There is (as rumoured) a chainsaw fight.

More than that, it is also, in many ways, a powerhouse performance for Cage. Cage’s method, in his own words, is to evoke the expressiveness of silent movie actors – he deliberately rejects realism, aspiring for something more visceral instead.

In most contexts, this doesn’t work – either because he’s working with a poor script or because it’s tonally wrong for the movie. Here it plays like gangbusters. He has complete command of every scene he’s in.

We Mandy on the big screen at The Civic – way down in the stalls, near the front. At the end of the film, my neck hurt from having spent so long craning up in awe. The film – especially in that context – is easy to recommend.