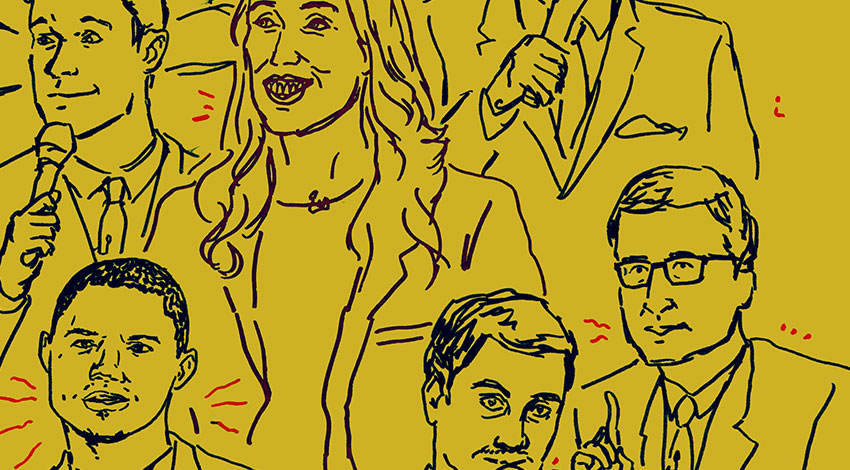 I don’t know him personally, but I would trust Jon Stewart with my life. His departure from The Daily Show in 2015 traumatised me on an emotional level, but here’s the thing:  I didn’t watch The Daily Show. I never watched The Daily Show. I didn’t even watch Stewart’s final week on The Daily Show. I just didn’t want him to leave — and I don’t know why. He along with other comedians/political satirists – Trevor Noah (an apt replacement), Bo Burnham, Jimmy Fallon, John Oliver, Chris Rock, and the entire cast, past and present, of Saturday Night Live, to name a few – are my capital-H Heroes, and I can collect them like action figures, because they’re everywhere. They’re in your magazines. They’re on your Twitter feed. Your children are sitting in their bedrooms re-watching Bo Burnham’s Make Happy on Netflix for the seventh time in a month, and you start to wonder:  where did all these people come from?

As I lovingly gaze over my collection of liberal entertainers and continue to consume their content like it’s the stuff I need to breathe, I can’t help but think that where they came from isn’t the question:  it’s what gave them the opportunity to rise out of the shadows. We’ve lived in a culture saturated with right-wing politics for centuries, and only in the last three decades has leftist zeal really begun to starve it out, but in doing so, it looks to me as if left-wing media has become more consumable than meaningful. Shows like The Daily Show, The Colbert Report, and Last Week Tonight, as well as the content of comedians such as Bo Burnham, Aziz Ansari, Chris Rock, and more, can thrive because of the new market opening for consumers of liberal political and social ideology, but where did it come from? Furthermore, where did the consumers themselves come from? I feel like I’ve been a left-wing militant since I first developed object permanence, but my kind are made, not born. So where the hell’s the factory?

Historically, the terms ‘left-wing’ and ‘right-wing’ originated during the French Revolution, based on where the Estates Generals were sitting in the courthouse:  supporters of the revolution on the left side, supporters of the Old Regime on the right. These days, Google describes the left-wing as “the radical, reforming, or socialist section of a political party or system”. We on the left are a people of social awareness. We believe same-sex couples should have equal social/economic/political rights, abortion should be legalised, healthcare should be affordable for everyone no matter of income, the right to bear arms should have heavier policing and regulation – and that’s barely scratching the surface. We sound like the good guys, right? The right-wing, then, is the racist old grandpa at the family reunion — you’ve loved him since childhood, but now you feel morally conflicted whenever he’s around. Grandpa’s conservative. He hates gays, hates women, hates poor people, and thinks everyone should have a gun in their back pocket at all times to protect themselves from gays, women and poor people. He is also under the impression that his third-party opinions on such matters have more legitimacy than those of the people upon whom inequality actually impacts. We do not love Grandpa quite so unconditionally anymore.

So how has this perception filtered back into mainstream media? Outlets like Fox News, CNN, and CBS still exist to churn up the political climate, but they’re starting to get drowned out by left-wing presenters, particularly comedians – or at least, that’s what’s happening online. A New Zealand-based survey conducted by yours truly found that 54% of left-wing consumers source their news from mediums like Facebook, Twitter, Tumblr, YouTube, and news/journalism companies that primarily circulate digitally, while 75% of right-wing consumers prefer traditional forms of media – newspapers, news radio, and news TV. Is there, then, a link between the platforms on which leftists and rightists find their news, and the ‘bases’ of left- and right-wing media? I spoke with Social Studies teacher Aidan Halligan, and he argues that to some extent, there is. New Zealand’s mainstream media – TV, radio, and newspapers – are “more leaning to the right, because why would you go outside the bubble if it’s providing the feedback you need? They’ve got a profile on social media, but they tend to be fairly inactive”. The left are much more active on social media platforms, but they “tend to get stuck in a situation where they’re only listening to voices from the left, and it can be very easy for them to lose touch with what mainstream New Zealanders are thinking”. Consider New Zealand’s general election in 2017:  me and my personal survey pool consisting exclusively of university students who had liked ‘NZ swing voters against dogmatic party affiliated memes’ on Facebook were convinced that Jacinda Ardern would win in a landslide due to her popularity amongst young voters, so imagine my surprise when the fate of our government was placed in the questionably capable hands of Winston Peters. (I was even more surprised when he ended up choosing Labour anyway, indicating that I really know less about politics than I initially thought.) My elite little club of meme-loving leftists was blinded by how narrowly the left-wing lens analysed the political climate, and by our confidence in social media to represent news to us accurately and fairly. We encounter a similar problem on Facebook, Halligan says, with its ‘If you Liked _______, then you might like _______!’ feature. “Through Facebook, you’re basically filtering down. We kid ourselves that Facebook expands our world with each Like, but it doesn’t do that. It narrows our world, and as a consequence of our world being narrowed, it makes it harder for us to understand”.

We choose the viewpoints to which we are exposed based on the main platform on which they are generated, and studies suggest that Generation X tends to have a higher density of conservatives, while Gen Y is generally more liberal. Social media, then, is the weapon of the youth, and since we all know that being young is way cooler than being old, a question ensues:  has it become cool to be left-wing? I sent out another survey to find out what the general public believed, and the answer was overwhelming:  100% of people surveyed believed that yes, it has. Popular opinion, however, is no match for actual research, so I did some. Remember Hillary Clinton? That old gal? Not to throw her under the bus, but it seems that good ol’ Hills changed an astonishing number of her political positions leading up to the announcement of her presidential campaign on 12th April 2015, including but not limited to:  her stance on same-sex marriage (Clinton opposed it until public opinion began to be in favour of it, at which point she made a miraculous recovery), immigration (she was “adamantly against” illegal immigrants in 2003, but is now in support of a “path to citizenship”/amnesty for immigrants), and trade (as recently as 2012 she was in support of a US version of TPPA, but is now opposed to the same Bill). As the public began to advocate for more humanistic social reform, so did Clinton, and I’d argue that’s no coincidence.

Take a look at political satire and comedy. If you asked me to name five left-wing comedians off the bat, I could do it:  Conan O’Brien, John Mulaney, I’ll break out Amy Shumer for those of you with terrible taste, and I’m going to repeat stuff with Bo Burnham because that makes a funny reference.  But if you asked me to name a single right-wing comedian, I’d draw up a blank. Do they even exist? Are they even a real thing? Probably, but they’re all obscure and low-key, because right-wing comedy/satire isn’t as consumable as left-wing comedy/satire. This begs the question:  are we truly becoming aware of social issues and choosing to consume left-wing media because of this, or has liberality become merchandise — do we watch The Daily Show on Comedy Central and subscribe to Last Week Tonight on YouTube because we care about the issues they’re bringing to the table, or are we doing it because it’s become ‘cool’ to be left-wing? Is that why Hillary adjusted so many of her positions? Is that why I’m so far up Bo Burnham’s ass?

Maybe that’s why I miss Jon Stewart so much. I never watched his show, but I know he’s left-wing, and that seems to be enough. We’re tied together by our mutual support for identity politics, my love of only paying attention to left-wing comics with no objectivity whatsoever, and the commodification of his platform. Maybe liberality has become as cheap and expendable as a Macca’s cheeseburger, but I like to think that we’re paying more attention to left-wing media now because, in turn, it’s paying more attention to the issues we really care about. Maybe the reason why I miss Jon Stewart is because he was a voice for the voiceless – or at least a megaphone.