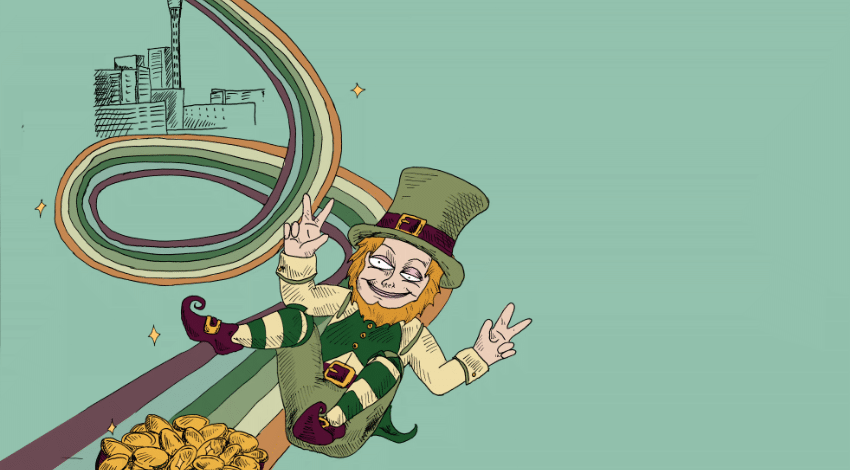 Ah St. Patrick’s Day. The one day of the year where you can acceptably dress up offensively green, don your best fake Irish accent and start telling everyone about  your ‘Irish heritage’. St Patrick’s Day in Auckland is exactly what you’d expect – more exciting than it is in Manawatu but far less so than in Dublin. Regardless, Craccum have scoured deep to bring you some things you could consider doing to celebrate the day of leprechauns, pots of gold and all things Irish. Alternatively, you could not celebrate St Patrick’s Day at all, up to you.

1: go Drinking at an Irish Pub

O’Hagan’s and Danny Doolans are both in the Viaduct and are both packed full on St Patrick’s Day. If you can handle waiting in line for a long time you should be able to enjoy your Guinness alongside everyone else in Auckland.

Side Note: Danny Doolans is R22 so I would just try O’Hagan’s.

He’s Irish! And he’s funny! Just watch some episodes. It’s filmed in England but that’s beside the point. He’s Irish and on St Patrick’s Day, that’s all that matters.

3: Irish up your coffee

An Irish Coffee according to Wikipedia is a cocktail made with hot coffee, Irish whiskey and sugar, stirred and topped with cream. All of these ingredients should be found in your home or workplace minus maybe the whiskey. I also recommend drinking an Irish coffee any day of the week. It’s a great way to smooth out your morning and make uni feel a little less harsh. Irish up anything at this point! Just add Whiskey and put it in a mug and you’re good to go.

This event hosted by SKYCITY ™ occurs on March 16th, which is not in fact St Patrick’s Day. I’m not sure why they couldn’t have held this event the day afterwards on the actual day but anyway, there’s a street fair.

Say you will, say you won’t, but seriously listen to C’est La Vie; it’s a true banger. It’s also got that banger of a line “people say I look like my dad” which is fucked coming from an Irish teen girl but anyway. I wouldn’t bother with the rest of their repertoire; just listen to this one on repeat and you will be fine.

Whiskey is a drink that is pretty harsh no matter how you take it so I would strongly recommend just drinking it. No one at University can afford the good stuff so anything you have should taste pretty rank. You could also have your whiskey at Shadows ™ so that’s something too.

It’s not Christmas so probably don’t watch Love Actually but Taken could be very festive for St Patrick’s Day? I had a look on his Wikipedia and it appears he hasn’t starred in anything that was very Irish themed. I would be so keen to see a Love-Actually style movie about St Patrick’s Day though starring him.

According to their website, the Auckland St. Patrick’s Day parade is the first in the world and the only in the southern hemisphere, which makes me think that St Patrick’s day parades are not really a thing and that we simply made them up. The parade goes down Queen St on March 17th 12pm-1pm and following that, the Irish Music and Dance Festival is happening near Aotea Square. So if you like Irish music and dance, there you are.

U2 are like Irish gods and I know you have that terrible album they made because it automatically downloaded to your iTunes library like an invasive little pest. So have a listen.

Once upon a time, some Irish people couldn’t eat potatoes, and it was an awful time. Please remember them by eating potatoes. Preferably not raw though.

“They’re after my lucky charms” cried the lephrauchan, but really he was talking about the marshmallow pieces that everyone wanted in the packet of cereal. Who put Marshmallows in Cereal? I mean genius but terrible for you. I know they’re American but they’ve got that delightful Irish mascot so just pretend we’re okay with it and eat it anyway.

Just like the Irish do! This is just as engrained in Kiwi culture as it is in Irish, so I encourage you to join together the love of our nations and get going.

If you can manage to make it over the harbour bridge and onto the North Shore then firstly congratulations, that’s a mission on public transport. Florrie McGreal’s in Takapuna are having a Hooley! This event is in collaboration with their neighboring bars and there’ll be live music and a lot of green.

Baileys is delicious no matter what you put it with. There is no wrong way to drink it.

No, I am not promoting them. I have put this at the bottom of the list because it should be at the bottom of your list. Bar 101 is open on a Sunday for this, but I am not sure I’d like to be in Bar 101 on a Monday morning at 2am.