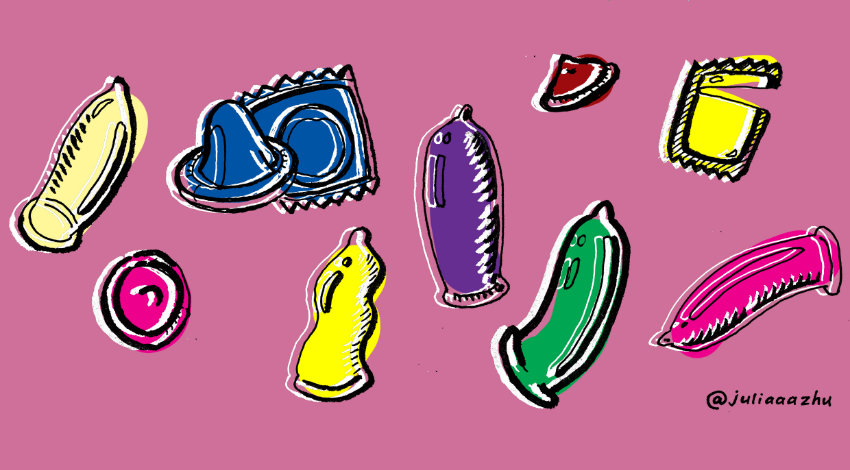 Flavoured Condoms: like regular condoms but with a taste. Flavoured condoms are designed to spice up  oral sex by adding flavor while also promoting safe oral sex practices. You have many options for flavours for when you get tired of the taste of dick. Try Chocolate, Strawberry, Cola, Bubblegum, Grape or Banana. Alternatively, if you want the mild taste of something without any of the calories, suck on a flavoured condom instead.

Grape tasted a bit fucked. No one on the team had any positive comments about this one. In particular, noting the taste of petrol of vinegar, which is not at all what grape should taste like. We wouldn’t recommend this flavor at all. It tasted worse than a regular condom which, yes we did taste test further down.

“Dip your dick in Diesel for the same effect” – Daniel

“Tastes like it’s already been on a dick” – Claudia

Cola smelt delicious – like coke bottle lollies. It was also the only non-coloured condom Intriguingly. It did however lack a strong taste and we thought it a poor substitute for real coca cola. We do not think that this product was approved by the Coca Cola Company.

“What is ectoplasm” – Cameron

Yeah bubblegum was good. It definitely wasn’t Hubba Bubba however but for a flavoured condom, we thought highly of it. Please do not chew this like regular bubblegum though.

“I believe Britney would approve of this one” – Lachlan

Very sweet tasting but the texture of it really put our testers off. The texture was bad. Like rough. The taste however was not bad with the taste of a red fruit burst being pretty prominent. Taste approved but the texture let Strawberry down unfortunately.

Quotes:
“Too much texture” – Claudia

Banana was an aptly flavoured condom however it got a mixed reception from the team. Although the taste rated highly – because it tasted like a Banana Fruit Burst – it was slightly acidic and one tester then struggled with the amount of lube on it which left a bad taste in their mouth for a long time.

“No amount of water can wash away this flavor” – Brian

Some of our editorial team were craving a chocolate fix when we tasted these condoms so this condom was highly appealing. Unfortunately, like in most instances, this flavoured condom was a not a good substitute for food product. There was also discussion about whether dick and dairy is a good combo but nevertheless, chocolate wasn’t awful. Whittaker’s is kiwi made, and much more delicious, but this flavoured condom was okay.

“What’s the RDI for this? Where is the calorie Information?” – Cameron

All scientific experiments require a control and so we made Daniel taste a regular durex extra safe condom so he could tell us how it compared. It rated higher than grape by all counts.

Overall, Flavoured condoms are great for encouraging tasty, safe, oral sex. However, they are poor food substitutes, non-surprisingly. We would definitely encourage anyone to try flavoured condoms for themselves. The best way to have sex ultimately is safely.