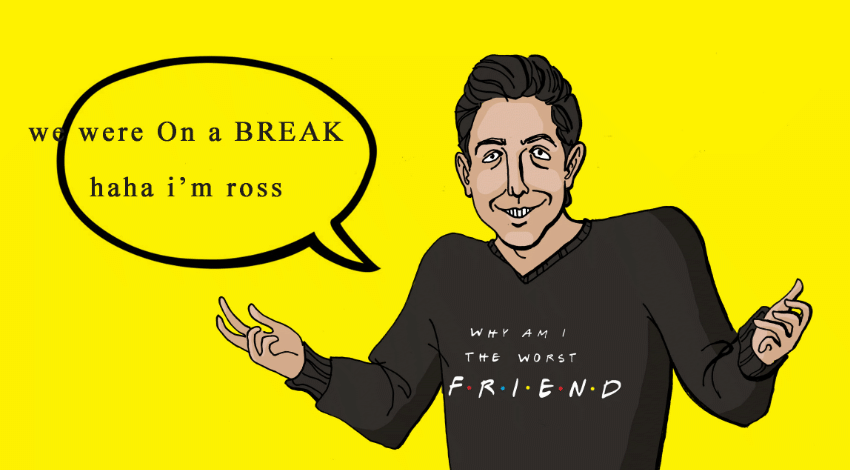 This character would have only improved the show through their imminent and irreversible death, and for those that knew him to have no memory of his foul stain on our Earth. But we were not so lucky. He is a bastion of wickedness and complete immorality, he is so without a soul that dogs cry black tears of mourning when in his presence. He is the greatest damning of the human condition that we have ever known. And he entertained the world for ten straight seasons, from 1994 to 2004.

Friends is a show that does not hold up well to contemporary standards. Don’t get me wrong, some of the jokes still land. The writers knew how to craft a punchline. It is bland, but sometimes blandness works at 5:30 pm. And it has been truly raked across the coals for only realizing black people existed in 2004, and its treatment of LGBT topics is cringeworthy at best. But while the show has been mercilessly attacked for this, there is one quality that has yet to be given the same treatment. Ross Geller still draws breath. This speaks to the extent of the veiny, obsidian tendrils Ross ‘the Unforgiven’ Geller still has lodged in the brains of his thralls, the slithering worms of blackened soil that encouraged Netflix to buy the streaming rights to Friends for 100 million dollars.

At the time of writing, the skies have darkened considerably, and the rain has not stopped pouring down ever since I first opened my laptop. I know that he is watching me. I know he is waiting for when I am most vulnerable. Just by mentioning his name does one run the risk of committing a Candyman-style summoning, cursing you forever – a sad ‘hello’ each time you enter a room, and the knowledge that you are the mortal vessel for the Proto-Incel. This is only one reason why he and his followers must be hung from the tallest tower and left for the vultures. And yet, his influence lives on. His role as entitlement incarnate and manipulation unbound must be broken. Ross Geller must be killed for the good of all media.

The being known as ‘Incelibatus Venomous’ to the Romans is a being that we must all work to defeat. As every other facet of Friends is broken down over time, we must do the same for Ross Geller. Only his death will free us from the pain that has haunted our species for eons. Only his death will truly allow us to respect women. He is a character that embodied the pitiful nature of an incel before the term reached public understanding, and this very nature still lingers today. He spent 15 years lusting after a woman who had never wanted him, and yet sunk into unconquerable pits of self-loathing when she naturally had no idea who he was. “Rachel, I need you. Rachel, I’m so sad and lonely, please fuck me. Are you gonna let me stay this way? I’m so miserable. You must hate me. No, no, it’s okay. Don’t apologise. Yeah, you could maybe give me a blowjob.”  She was obligated to him on the virtue that he wanted her. He used his sister to get close to her, and then like any shell of a human being, refused to let go, even when she had tried to pry his xenomorph fingers off her. This was supposed to be seen as a good thing. The aforementioned worms of blackened soil got Netflix to pay 100 million dollars for this. He then spent the rest of the ‘90s and early ‘00s gradually and effectively manipulating her into having sex with him, into marrying him, into pitying him so totally that she could not see life without him. And it was the most successful show of its time.

But that is only the tip of the iceberg for Ross Geller. We were all aware of his ‘Hah I’m So Sad And Goofy Please Fuck Me’ nature, but it was all for laughs. The Prince of Depravity was not only meant to be a relatable figure, he was meant to be somewhat of an authority figure within the show, a professor at New York University, no less. After six or seven years of treating Rachel like a blow-up doll to blow his sadsack ballsack, she’s broken away for the meantime. Immediately, Ross abuses his position as a professor at a prestigious university and fucks one of his students – she’s 21 to his mid-30s, but it’s a blatant violation of power dynamics that is never addressed within the show. And again, it’s played as relatable – that goofy Ross, using his status as an adored professor to score that pussy! That New York life, lol! In the fifth episode of them being together, Ross gets bored and decides that maybe she isn’t mentally old enough for him. Because he’s mature. And using his status to fuck her and potentially date her. He’s the mature one. Ross ‘Nothing works out for me, please stroke my cock’ Geller then goes back to pining after Rachel and posting on r/incelfies.

Friends has been criticised for a lot over the last 25 years, and even more so since the millennials grew up and were like ‘Y’all seen this shit?’. But somehow Ross remains untouched, sitting on his throne made of tissue and sinew, cumstains and self-pity. No one admits to liking Ross Geller because that’s tantamount to admitting you’re the Zodiac Killer, yet, Incelibatus Venomous has come out of the new era of criticism relatively unscathed. And if we are to truly progress into the new era, we must kill him. He must be hung, body broken and eyes burned out. It will be a tough battle – he has eaten the flesh of all who dared to strike his pasty shell, and his tendrils can slice the air itself. But Ross Geller has to die for the good of all media. If we are to truly apply our criticisms of creepy men into practical action, we must be prepared to unsheathe our swords and run them through the Tartarean heart of one of their most famous allies.

White society will never let go of Friends. But I think we can cut off a finger and let Ross Geller fall into the abyss, never to return.