Good God, Get a Grip, Girl 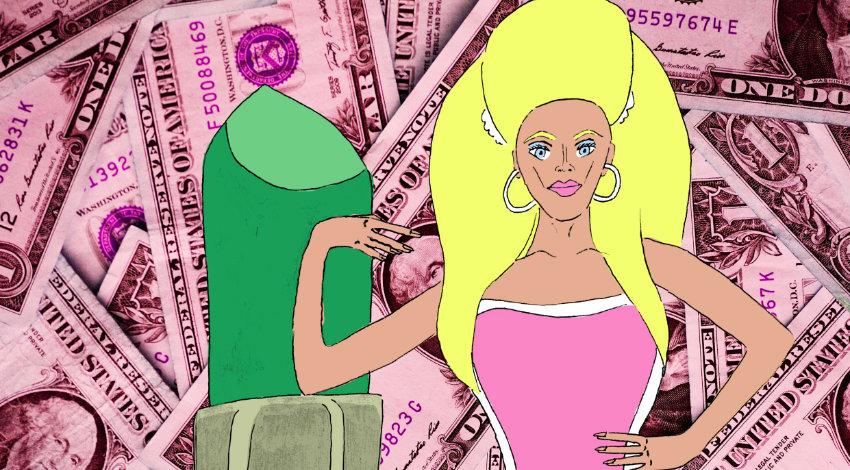 Just so we’re starting off completely clear and honest with each other, this isn’t going to be a think piece on how fucked up RuPaul is off -camera, as I just don’t have the time and energy for that. We all know that. Tale as old as time, hag past her prime, etc. Search his name and every -ism and -ist you can think of, ol’ Peanut Head has done it all. This isn’t what this little spiel is going to be about.

I’m going to talk about the unmistakable and perhaps irreversible change that the show itself has gone under ever since production fell into the hands of VH1, a network best known as the people that would do special nostalgia episodes about the music of decades gone by, dragging out the husks of the coked out survivors of those decades to sit in front of a green screen and reminisce about times gone by, eyes frantically scanning the fifty dollar note on a string dangling in front of them. With such a historic network taking the helm, who could have guessed what was to come?

RuPaul’s Drag Race has never been the height of television, and I say that as someone who has watched it since the free cocktails had alcohol in them. However, the market has changed with the mainstream success it never thought it would achieve. With the massive culture change it has influenced and then profited from, the show has not been for an LGBT audience in about five years – while the change in focus is not necessarily a bad thing, it raises questions as to what has been watered down in order to appeal to the wider heterosexual audience. Hell, the show shed any lipservice to the culture’s black roots once they got a budget in Season 2 and realised how much money they could make from white twinks. While superficially it still aims to capture the heart and soul of every twink that wants one quick walk in their mother’s heels, the almighty twink dollar (pound? Hah!) has long been supplanted by the heterosexual shekel. And with that, some questionable changes have been made.

I suppose the most notorious talking point has been the winner’s circle for the last few years – while I’m not going to get too deep into this topic, the overwhelming pastiness of the last few crownings has come under considerable fire. It’s been a hot discussion since 2017 – amazingly, three main seasons and two spinoff seasons have been on air since then. The question being posed is this: since VH1 came into the picture, and the Ru’s admitted focus on mainstream acceptance became the modus operandi of RuPaul, why have the winners rapidly diverged from the previous standard of diversity into a near-uniform level of whiteness? It’s a tough question about what Ru and the production team see as mainstream. While the controversial double crowning of Trinity and Monét X Change has alleviated the pressure somewhat, many fans still have questions about what message VH1 Is putting forward in their hunt to be sucked and fucked by the Emmy committee. Especially when one considers the recent practice of baiting outspoken black queens into becoming villains, since nothing gets ratings quite like seeing the angry black man tear down a crying white twink. It’s not exactly subtle.

That’s not to say all changes have been bad – it took RuPaul eight years to be pressured into not saying transphobic slurs in public, after all. There was a long period of time where this was acceptable by a large majority of the LGBT community, as the guy saw no financial impetus to stop doing this on the show, let alone on his unchanging Adobe Crackpipe-produced singles that every queen-in-training is contractually obliged to fawn over on the show. He even reluctantly lets openly transgender queens have some screen time nowadays. Some progress has been made, even if he is noticeably bitter about it every step of the way. This has gone a long way towards endearing the show towards the new ‘I just love Modern Family!’ crowd that VH1 considers the main audience, who wouldn’t tolerate such a thing. Mainstream acceptance has forced his hand and conversely, allowed RuPaul to be a reluctant flag bearer for transgender acceptance.

However, the most noticeable issue is just the sheer issue of quality that has come with pumping out more seasons that Mia Farrow has children (“Mia Farrow and her black children” is still one of the funniest images ever) in order to take advantage of the post-Emmy momentum. It’s just endless – with an average of two seasons every year since 2016, with one of those seasons being the All Stars seasons, the fatigue has set in rather quickly. Especially considering the frequency of the All Stars seasons has resulted in a betrayal of the title – with all the true stars of the show either used up or unwilling to head back into the gruelling production cycle, some decidedly non-star queens have been drafted into the proceedings in order to make up the numbers. It’s like asking for Pringles and getting a Corntos bag, like putting Selena on your playlist and getting Selena Gomez instead – the talent pool becomes desperately finite without careful management, Kauri dieback without DoC quarantine.

It’s this rush to unleash a new cycle of GIFs onto the internet which has resulted in a breakdown of quality control – every episode has a new For The First Time In Herstory stunt to be pulled, every episode has a new group of emotionally unstable queens willing to eat the bone marrow of other contestants. While this is symptomatic of reality TV as a genre, and part of the appeal, it is unprofessional in the sense that there is no rationale for the shock value. Somewhere along the line, the production team have lost their touch at creating shock content that was worth waiting for. The fights mean nothing – no queens have the skin necessary to trade criticisms without taking it personally, and no true verbal ingenuity to deal out vicious insults when the fights do matter. In short, there are no professional cunts like years past. Tell me one person who thought the six-way lip sync was anything less than pathetically sad:  we were watching six queens run out of space to do anything but the dog-wiping-their-arse-on-the-carpet butt shuffle on the runway. It was the third episode. I’d rather go to Burger King with fucking Eureka at this rate.

That’s not to say that I’ll stop paying attention to the show – I’m just as likely to defame the good name of KFC Potato Gravy, which is to say, not bloody likely. But with the exception of Yvie, there are no true stars this season. It’s the first season in which I truly don’t care who wins, because the quality of those included leaves little to the imagination. Which is perhaps a side effect of carefully prioritising the success of cast members that have no chance of supplanting RuPaul as the name-brand drag queen.