We need to talk about Kevin… and Joe… and Nick. 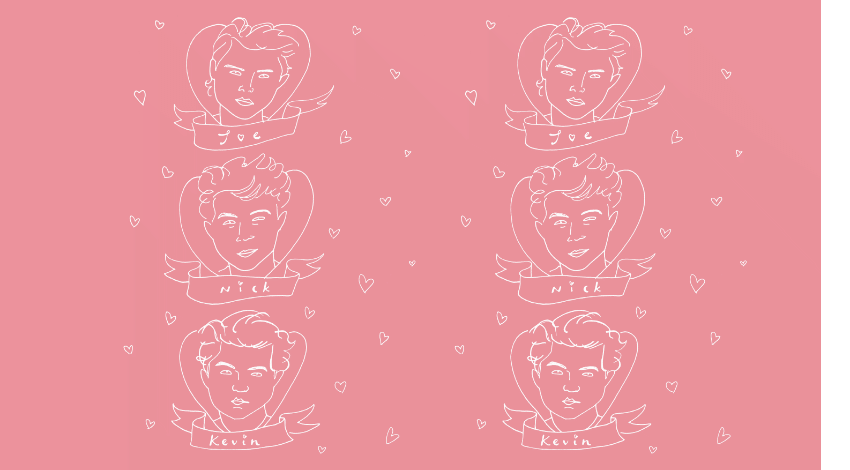 The world of pop culture was shaken to its core earlier this year, with the reformation of iconic boy band, The Jonas Brothers. Following the release of Sucker,and a few hours of Twittering, I found myself experiencing a major identity crisis. Was Joe always this hot? Am I no longer a Nick girl?. I wonder what did really happen to Kevin?

Since Camp Rock being released in 2008, boy bands have been a massive part of my pop culture awareness and coming-of-age. The Jo Bros came first, infiltrating my consciousness through Disney shows, movies and the Burnin’ Up music video that blasted during commercial breaks (still a tune).  A Little Bit Longer was one of the first CDs I bought, and The Jonas Brothers poster, one of the first posters I ripped out of a Girlfriend magazine. Though it may have changed post reunion, Nick was the love of my life and I was insanely jealous of anyone he was dating. Damn Miley. The breakup of the band, according to my mother, was the true source of my tween angst, where I cut my hair into a side fringe and wore black skinny jeans all summer. Are you cringing yet?

The Disney three-piece managed to prep my young brain for further consumption, so I was primed and ready when the British boys of One Direction burst onto the scene. I remember seeing What Makes You Beautiful at age 12, and feeling something very special stir deep in my soul. Until Year 11, One Direction were heavily featured on my iPod touch, not only in my music playlists, but also in fan-fic screenshots. I cried at their concerts, hung posters on my wall and talked at length, to my very bored family, about their lives. My best friend and I once sat through a 7 hour livestream for #1DDay, live tweeting the whole thing. It took me a long time to decide on my favourite, the top spot changing with each ‘artistic’ phase the band went through (Gotta Be You Harry is something I still dream about). The cheesy pop group were also the main subject of conversation with my friends, and I’ve managed to collect a fair amount of blackmailing material for 21st birthdays. We found out about Zayn’s departure from the band on our way home from a phone-less school camp. It was a very quiet bus ride.

5 Seconds of Summer were also prevalent during this phase, my love blooming when the Aussie band opened for One Direction at Spark Arena, in 2013. They were SO punk rock and SO edgy, jamming on their electric guitars, in sleeveless Nirvana and Sex Pistols shirts. One of them even had blue hair. This was when my Tumblr career began, my dashboard filled with looping gifs and ‘imagines’. When I wasn’t admiring those gifs of Luke, Calum, Ashton and Michael, I was listening to curated playlists of the band’s favourite music. I still know a lot of Blink 182. When my best friend and I went to their concert in 2015, we were the oldest in our row by a good few years.  Maybe that was a little too much embarrassment for me to handle, because that concert marks the beginning of my abandonment from the boy band wagon.

Even though my boy band experience might seem extreme to those unfamiliar, it is definitely not unique. Famously, fangirl fainting has been going on since The Beatles. ‘Beatlemania’ ran rapid in the 1960s, with the Fab Four leading the British Invasion of the American music scene, tearing teenage hearts apart. The fandom was widespread. When the Liverpool lads visited Wellington in 1964, seven thousand fans waited for their arrival. One girl slashed her leg on a wire fence in an attempt to climb it. Witnesses have noted that when the boys stepped out of the plane, the screams of the crowd drowned out the sound of other aircraft engines. I don’t know how many of you were at that One Direction concert in 2013, but I wouldn’t be surprised if Auckland’s Directioners managed to beat that. My camera microphone was blown and my ears were definitely ringing for days.

There is clearly a certain reaction that can be tracked through boy band fandom. Stereotypical representations of fans show screaming, crying teenage girls, losing their minds at the mere sight of their pop culture gods in real life. These emotions are often eye-rolled in wider culture, with exasperation and frustration directed towards ‘crazy fangirls’. I have definitely felt some shame in making recognition of my previous love for One Direction, due to negative perceptions about boy band fandom. I was scared of being mocked for a lack of intelligence or laughed at for extreme and ‘unreasonable’ behaviour. From the outside, the act of fangirling may seem ridiculous. In my case, outward actions of screaming and crying were definitely present, but that only touches the surface of the experience in a boyband fandom.

Fandom presents the opportunity to gain a new community. Millions of people share a common interest, opening up the possibility of discussion from many places around the globe. Using platforms like Tumblr, Twitter and Instagram, fans have a space to share their experiences and talk about things they love, which may not be present at school, work or home. Fandom has the power to connect people who may never have known each other and starts up enthusiastic discussions across the globe.

Boy band fandom also gives a space for expressions of emotion. At a concert and in places where you have the company of other fans, there isn’t any shame in screaming, singing and crying. You know that so many people in that space are experiencing the same emotions. It’s really cathartic to feel those feelings so loudly, with complete mutual understanding from your peers. It’s a release of the energy that has been building during your quiet online and localised fandom activity. The emotion at a concert or fan meetup comes from making the community, and the stars who lead it, tangible. Suddenly, the contents of your Tumblr dashboard can be seen, heard and felt in real life, and instead of just reblogging you can add your voice to the crowd.

Finally, fandom allows for representations of people familiar to you. In online community, certain fans have garnered large followings within their selected fandoms. There has been a proliferation of fan YouTubers, such as colliscool (major 5SOS stan) and Mark Parsons (an One Direction animator). Many of these fans show themselves listening to new music or freaking out about a Twitter mention from their fave. Seeing someone lose all chill and show genuine excitement for something you love is incredibly comforting. It is important to see enthusiastic and shameless representations, especially if that behaviour is something you typically feel embarrassed about.

So why, when boy band fandom could bring about such positive experiences for so many people, do we roll our eyes and see a fannish behaviour as illegitimate and immature? One major reason is a general cultural distaste for any form of media that is closely tied to feminine expression. We are made uncomfortable by any allusion to the fact that young teenage girls have a sexuality, and have sexual feelings. Consequently, we giggle at girls who scream about these boys and don’t take their emotions seriously. Boy band fandom gives young girls a space to express those feelings in a way that feels normal, but outside of that fandom, they can feel silly for their engagement in something that is culturally treated as worthless.

This doesn’t mean there aren’t criticisms to be made of boy bands. There are often problematic messages sent to young fans through the medium of the boy band, and there is definitely some gross corporate hands behind their image. Sometimes fan communities themselves can produce toxicity, or perpetuate different troubling narratives of identity (gender, sexuality and race). Fans aren’t unaware of these issues; they are often the first to call out these problems in the community. For example, the new film After, based on a Harry Styles fanfiction, has been torn apart in One Direction fan communities for promoting abusive relationships and outdated gender expectations. There is a perception that intense fandom is upheld by unthinking teenage girls with zero agency, with greedy corporations taking advantage of their mushy brains, but their unbridled authenticity and commitment to the boy band allows for complex engagement with issues of gender, sexuality and identity.

I might have written this article with a self-deprecating tone, and I can’t honestly say I have no twinges of embarrassment when I reflect on this time in my life, but I hold so much fondness for the years I spent deeply involved with boy bands. They were a major part of my coming-of-age story, and allowed bursts of expression and emotion in turbulent teenage years. Retrospectively, I can recognise where this embarrassment comes from; a cultural shaming of feminine expression. I hope that now, with The Rise of The Jo Bros (I’m expecting a Netflix doco at some point), we can take teenage girls a little more seriously, and maybe embrace the emotional liberation they’ve become experts in.

The Ultimate Boy Band Playlist (for your listening and viewing pleasure):