420 Legalise It? Politicians and Academics Battle It Out on the Legalisation of Recreational Cannabis 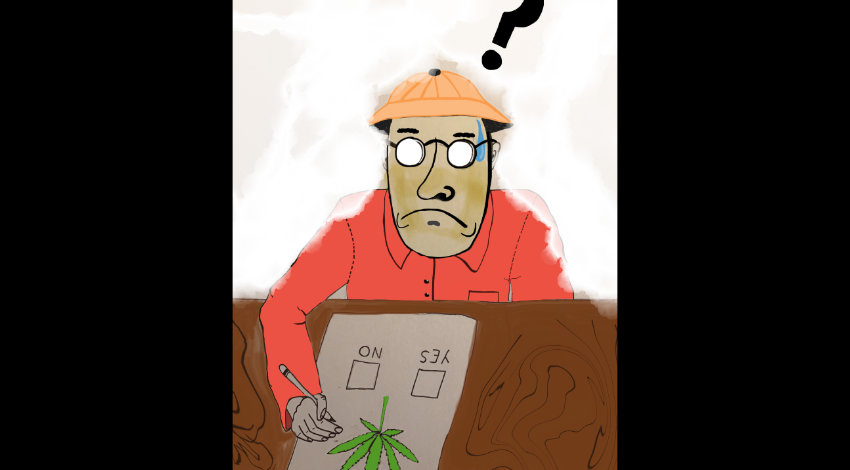 On May 7th, the Labour Party made an announcement that set student hearts aflutter nationwide. Justice Minister Andrew Little revealed that a binding referendum would take place in 2020 to decide whether New Zealand will legalise recreational cannabis. However, when we do vote ‘yes’ or ‘no’ next year, do we know what we’re actually voting for? Will we be able to grow cannabis in our back gardens, smoke it at the local coffee shop, or buy it at the dairy? Thankfully, UoA’s Public Policy Club put on a Drug Policy Debate with some of the country’s most well-informed academics and politicians to help us understand the proposed legislation a little better.

What are some of the biggest failures with New Zealand’s current drug policies?

Drug Foundation: Maori are 4 times more likely to be arrested and convicted for cannabis. Those convictions stay with you for life.

The government has to put together a piece of draft legislation. My challenge to the government is to make sure that legislation is as comprehensive as possible. But currently, we won’t know what we’re buying at the referendum.

National: Well, National wouldn’t be having this referendum. But if we were, we would ask questions like – would they be able to grow it next to a school, or a mental health facility? [crowd groans]

Labour: I have worked in CYFS and seen the harm cannabis brings to our most vulnerable. New Zealand is not the first country to talk about legalising cannabis. In terms of medicinal cannabis, we passed legislation recently. In that debate, National were talking about whether people would smoke cannabis in front of schools, mental health facilities, all the same arguments. But our recently passed legislation shows that we are responsible, and parliament will craft responsible legislation.

We say; ‘let New Zealand decide’. We have a year, which is plenty of time for information. Labour’s stance is a two-prong approach: addressing the justice system through the dealers, and rehabilitation for users. Every government is sovereign, and they can change the legislation if they don’t like it.

Labour says there will be strong public safeguards – what are those safeguards?

NZ Drug Foundation: The proposed legislation aims to remove the black market. One third of year 13 students use cannabis. So if we limit the purchase age to 20, we create a safeguard through limited access. If it is legal, you can also ask for help if cannabis is becoming a problem.

I feel like if it was legal, people who may not have previously tried cannabis because it was illegal might want to try it?

NZ Drug Foundation: Yes, people might try it, but [they would do so] in a situation where you can see the ingredients and tailor your experience. If drug use is regulated so that it doesn’t cause harm, it won’t be a problem. Separating use and harm is really important.

Isn’t there also a concern that if we legalise cannabis, there will be a higher rate of people driving under the influence?

NZ Drug Foundation: We have some really great PSA’s in New Zealand about drunk driving. Currently, we don’t have any of the same PSA’s around driving high. If cannabis becomes legal, we can more freely educate people as to the risks of driving high. We can also talk about a wider idea of impairment – for example, driving tired is in some cases just as dangerous as drink driving.

We are among a lot of young people tonight. I’m sure lots of you have been to festivals. What is your stance on drug testing?

SHORE & Whariki Research Centre: We don’t have strong evidence that drug testing reduces poisonings. We have some evidence on what people will do if they know what’s in their drugs, but a lot we’re still in the dark about. For example, will they throw it away if they’ve already paid for it?

In general, it is a good harm minimisation approach. But there are limitations to the science in terms of what it can detect. Also, it’s not clear that [drug testing] will warn people off taking drugs – drug takers are arguably already risk takers.

National: The message I would send to the Drug Foundation is “don’t try changing the law by breaking the law.” Another thing to the Drug Foundation: you claim that, if we set a legal age of 20, suddenly school-age children won’t be using cannabis? Look at the United States – the black market is still there, because it is cheaper.

Drug Foundation: I have had the privilege of bringing a spectrometer to festivals. We don’t want to see deaths at festivals. It is a legal grey area. We set up with permission of the festival; scraping, checking, giving results, and giving people advice on how to reduce harm from the drugs they’re taking. When people are informed about something, they act on it. For people who do decide to take it, we can talk about things like safe dosage and not mixing drugs.

In terms of all that civil disobedience stuff – that’s why we had the needle exchange in the 1980’s, and now our rates of HIV are less than 1%. Total prohibition just doesn’t work.

No one wants to have an overdose at a festival. Harm reduction is seen as controversial, but at these festivals we are at a place where drug use is highly normalised. We wouldn’t take a spectrometer to, say, a high school.

If you were to vote tomorrow, would you vote yes or no?

SHORE & Whariki Research Centre: I guess yes, but I would like to see more detail. It could be ‘grow your own’, could be no sales, or it could be a monopoly. The regime is not clear at all.

National: No. We don’t want to open the door to ‘Big Marijuana ’ like we have done with Big Tobacco. National does, however, support medicinal cannabis.

CAYAD: Our job is not to lobby. It is to inform our community. We want people to be able to decide how drugs should impact their lives. 90% of people don’t have a drug problem. We need to look at the 10% that does have a problem. We don’t want young people to be using drugs, but they do. Just like they try sex and drinking. So we need to educate them.

Labour: If NZ votes yes, it will be binding. I need you guys to know that everybody’s vote will have the same weight. So we all need to educate ourselves.

Act: We need to do the research and look at the evidence. In order to get the evidence, we need an independent Royal Commission report that isn’t cherry-picked by the government.

How has legalization affected other countries?

SHORE & Whariki Research Centre: These changes are still very new. For really reliable results, we would need to wait 10-20 years. But we can look to places like California that have had medical marijuana for a while. There is evidence that legalisation increases adult use, so we need to be prepared for that.

If you look at Colorado and Oregon, they have mixed evidence on youth use. But there has been an increase in adult use, psychosis, and cannabis-related emergency room admissions. However, it would be naïve to think that legalisation would not increase use, especially if you’re having places advertise it.

But just because we legalise cannabis doesn’t mean we must have a huge commercial market. In Uruguay, they have private places, like cannabis social clubs. I think it’s important we don’t end up with a cannabis industry like we have an alcohol industry.

What is your stance on reducing drug harm?

National: We keep hearing the argument that regulation is better. But we have had regulatory laws on alcohol and tobacco for a long time, and it still causes a lot of harm. Under this argument, we would have to ask: “do we legalise MDMA? Do we legalise Meth?”  We have to ask the question:  “where do we stop?” [at this point, somebody (definitely not a member of the Craccum editorial team) yells: “OH FUCK OFF”].

SHORE & Whariki Research Centre: I think a lot of mistakes have been made with regulating alcohol and tobacco. But we can learn from these mistakes. Now we have a lot of evidence on what works and what doesn’t. We need to look at banning sponsorship and advertising, as well as regulating availability. We now know a lot more about what works for reducing alcohol harm, and we don’t need to look back.

Drug Foundation: If we look at things like prohibition on alcohol, we see things like moonshine and other extremely high potency, undistilled products. These cause deaths, blindness and more.

The way the illicit market works – there is a lot of risk involved, so it’s cheaper to have it in really high potency. Legalisation doesn’t mean you can just walk into a shop and buy it. For anything really potent, if you legalised it, you would still have it highly restricted and regulated.