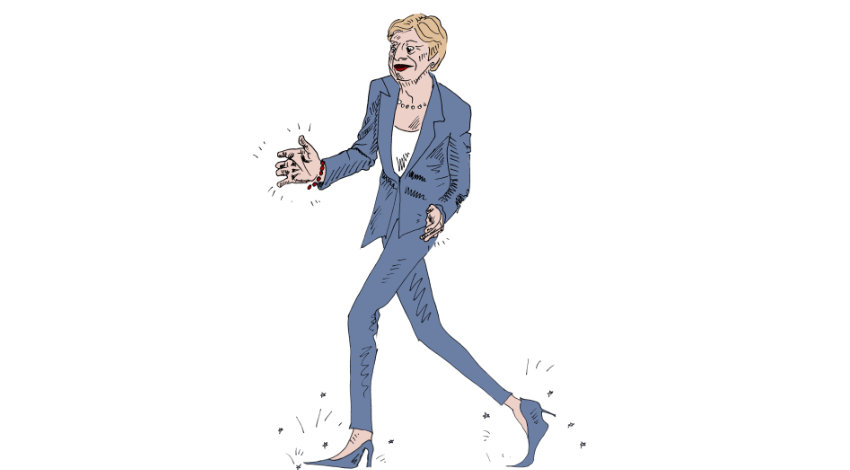 Theresa May, beloved dancing queen and the second female prime minister of the United Kingdom is going to step down on June 7th. Theresa May will be well known not only for her political achievements (or lack of) but also for her dancing – which at best can be described as ‘fucking awkward’. In the spirit of Theresa May we’ve decided to break down her best moves not only on the dance floor, but on the parliament floor. This one’s for you, T May.

6. Teach May How to Dougie: It was the dougie seen across the globe – or rather, the failed attempt at such. On the last stop on her whirlwind trip around Africa, Theresa May visited some schoolchildren in Nairobi and showcased the moves that would come to define her time in power. They were busted, oh, they were broken. There was no fluidity – a poor showing for the prime minister. Pure mayhem.

5. The Bend and Snap Election: Desperate for an increased majority in Parliament that would allow her to begin the process of Brexit, Theresa May and The Tribe Called Conservative called for a general election – the second in just over two years. Furious at this, the public responded by giving a massively increased vote share to Labour and the Lib Dems. While the Tories still clung to power, they had taken a total beating, and Theresa had no choice but to wobble back into the seat of power with even less flexibility from before, the Bend and Snap Election having ruined what was left of her vestigial spine.

4. Cha Cha Slide out of the European Union: Theresa May did not have a job most would envy – tasked with negotiating Britain’s exit from the European Union, and simultaneously satisfying the demands of the hard-core leavers within the party ranks, it was no surprise that she completely fucked up by alienating the EU leaders tasked with dealing with her. They asked what Britain was going to do for them. Theresa simply responded ‘What is M gon’ give to ya? Not a motherfucking thing.’

3. The No Confidence Crip Walk: It’s Christmas 2018: just when Britain was sure Theresa May was done and dusted, she surprised us all by managing to survive multiple no confidence votes. Although it was a slim majority, Bone Thugs-n-TheresaMay managed to thoroughly dunk on her opposition within Cabinet, allowing her the opportunity to get on the tables and crip walk through the haters. Despite overwhelming public opposition to her role as Prime Minister, Theresa May still managed to do a c-walk that Britain would not forget.

2. Stanky Legg Through the Fields of Wheat: When asked to tell the ‘naughtiest thing she’d ever done’, the Ghostface Prime Ministah told the world of the time that she put on her best pair of Timbs and stanky legged through the fields of wheat, much to the dismay of the local farmers.

1. Krumping Through the Pain: All good things must come to an end. And for Theresa May, that was May 25th, where she announced her resignation. After years of public embarrassment and unprecedented levels of mockery and humiliation over her handling of Brexit and the cold roboticism directed at much more direct tragedies, Gucci May finally bowed out. But after crying on the steps of Number 10, she managed to achieve one more glorious piece of movement. With tears on her face, she krumped back into the residence she would only have for just over another week – the moves were solid. She popped, she dropped, she locked. It was just too little, too late.