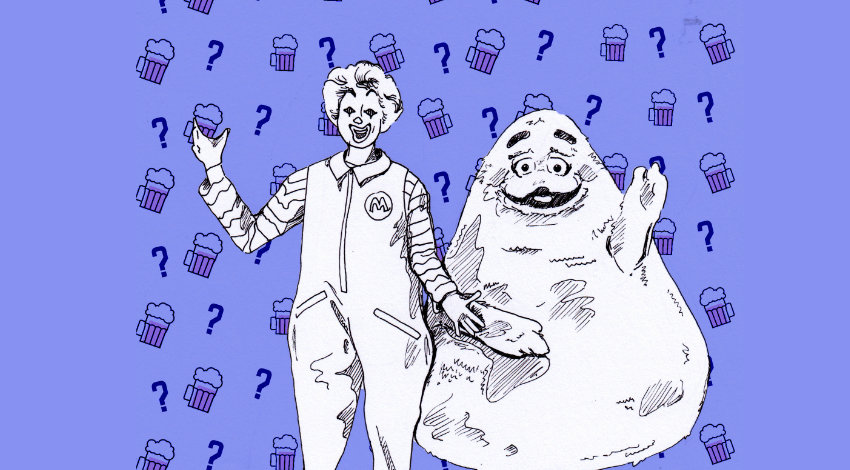 This week, Features Editor Cameron Leakey, wakes in the middle of a fever dream/nightmare to break down Grimace, Craccum’s favourite purple friend.

In 1970/1971, Needham, Harper & Steers, a worldwide marketing communications company was approached by McDonald’s to create a fantasy world for McDonald’s to use in their marketing campaign. The world, dubbed McDonaldland, comprised of many colourful fast food related characters.

The McDonaldLand characters included the already existing Ronald McDonald – a character originated by Willard Scott and only recognized as such by McDonald’s in 2000 – officer Big Mac, the Hamburglar, Mayor McCheese, The (Mad) Professor, Captain Crook and of course, Grimace. Now some of these creatures are very straightforward, after all, Mayor McCheese is not a subtle character in any form, he’s a cheeseburger mayor. However, Grimace is a bit of an interesting character and a bit of a  legend.

Grimace has been described as many different things. According to mcdonalds.fandom.com, Grimace is a “large, purple, anthropomorphic being of indeterminate species”. Wikipedia refers to Grimace as a “large purple monster”. One episode of Family Guyrefers to Grimace as “Ronald McDonald’s retarded friend”. Lachlan Mitchell, Craccum Arts Editor, once told me that Grimace was an “anthropomorphic tastebud” whilst, Folklore appears to indicate that Grimace is, in fact, a milkshake blob. Whilst Grimace’s actual being is unknown, what is known is his distinctive appearance. A tear drop shaped purple body, with a rounded booty. Grimace is clumsy, clutzy and is constantly being saved from his own misfortune by Ronald McDonald. Grimace is known for speaking with a stereotypically simple tone and punctuating his sentences with “duh”.

At this stage, I want to argue that this near-death experience changed Grimace forever. Either it’s an Avril Lavgine doppelgänger situation or Grimace experienced some deep-seeded psychological changes from this incident. Regardless, in 1972, Evil Grimace was reborn as simply ‘Grimace’ ” in what I call a ‘Reverse-Batman’– You either die a villain or live long enough to see yourself become the hero”. Grimace became a friendly part of the McDonaldLand universe and in the process appears to lose two of his arms (a freak accident?). He also becomes allies with Ronald McDonald. A new origin story was created whereas Ronald had saved Grimace from his again near death experience whilst on a runaway pram.

Throughout the years of the McDonaldLand advertising campaign Grimace also appeared to have his family introduced. Although I cannot find further references of this information, research indicates that there are several named family members: his grandmas, Winky and Jenny Grimace, and his brother, King Gonga – who rules over all the grimaces apparently. If King Gonga does in fact exist then Grimace might actually be Prince Grimace but this facet of the McDonaldLand universe has never been explored. Grimace also looks a lot like the Cookietime Cookie Monster and I hypothesise they may be distant relatives.

One family member who has definitive proof of existence is Uncle O’ Grimacey – a green Grimace character who is obsessed with St Patrick’s Day Shamrock Shakes. Uncle O Grimacey is terrifying, he looks like a creepy neighbor covered himself in grass and is attempting to blend into the hedges. Uncle O’ Grimacey appears every St Patricks Day like some sort of Irish Oracle/Aura/Omen. As for why every Grimace has a special name except for Jenny Grimace, god only knows.

[Authors’s footnote: the shamrock shake advertisement is really freaky because this Grimace bends down to smell a flower and the costume folds in on itself and it looks truly horrific, if you have time google ‘Uncle O’ Grimacey’ and have a look].

McDonaldLand was a prime staple in the McDonald’s advertising campaign for approximately 35 years before it was mostly scrapped in 2003. Whilst Ronald McDonald still graces McDonald’s advertising (and his namesake: Ronald McDonald House), the other characters have gone largely ignored. Was Grimace a fever dream in the middle of our childhood? Or an oasis that provided a beacon of hope. Grimace is an icon. Whatever he is, wherever he is, however he may be, godspeed Grimace, gone but not forgotten.