A Completely Objective Ranking of Grimace Ads, from Worst to Best 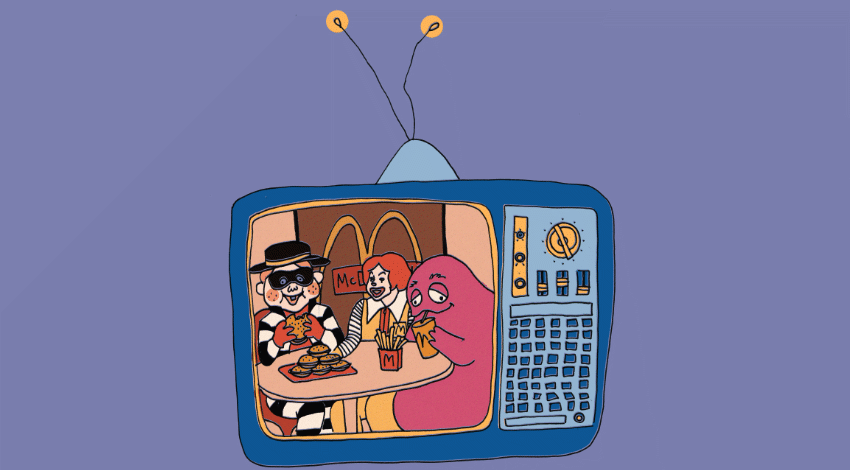 Grimace was in a lot of ads. The ads vary in quality. We’re ranking them. If you need more context read the title again. Let’s get started:

The Ad: The commercial starts with Ronald McDonald and Grimace leering over a group of young children like a couple of brazen paedophiles. “Want to know how I met Grimace?” Ronald laughs, semi-hysterical. Before the children have the opportunity to answer, we cut to Ronald McDonald in a baby carriage. Why? Fuck you, that’s why. The Ronald-mobile takes off down the road, chasing Grimace, who is also, inexplicably, in a baby carriage. Ronald and Grimace engage in a cross-country marathon of epic proportions, racing through a forest, a river, and then a city. Just when it seems that Ronald will never catch Grimace, he has a eureka moment. Pulling into a McDonald’s drive-thru, Ronald uses his business connections to get a happy meal. Grimace, noticing the happy meal, pulls-over. Cut back to the present day. “And that’s how I met Grimace!” Ronald says, bursting into laughter. The children join in, laughing and clapping. The girl points at Grimace, who grins stupidly back. Har-har you fucking idiot. You stopped for a happy meal.

Thoughts: ‘How I Met Grimace’ is a schizophrenic mess of an advertisement. Despite this, it still manages to be very boring. By far the worst of the bunch.

Rating: Cheeseburger but the cheese is made of shit. And so is the bun and patty.

4) Early Grimace Commercial (undated, but, going off the quality of the footage, probably sometime in the mid-to-late 1800s)

The Ad: We start in a post-apocalyptic depiction of 1950s America. Shrivelled shrubs dot a brown-grey wasteland of rubble, rocks, and withering trees. Ronald McDonald sits on a log between two children – one boy, one girl. “I want some coke,” the boy complains, completely oblivious. Ronald sighs and looks down. Cut to a brown (he’s purple literally everywhere else?) Grimace sitting on a pile of cups. The narrator – because there’s a narrator now, apparently – explains that no-one in McDonaldland can have a drink until Grimace stops hoarding all the cups. Suddenly, Ronald leaps to his feet, pointing to the air. Dressed as a postman, he approaches Grimace and hands him an envelope. “I’ve been picked for the McDonaldland beauty contest!” Grimace cheers, rushing off screen. Ronald and the kids grab a couple of cups and sit down to have a drink. Mission accomplished.

Thoughts: Bold visual aesthetic. Writers who weren’t afraid to take the characters in new and mostly pointless directions. A small boy saying he wants coke. At least these guys were trying.

Rating: Quarter-pounder. Boring, but it gets the job done.

The Ad: The ad starts with Donald Trump grilling Grimace over a desk in the penthouse of the Trump Towers. “How do you do it?” Trump demands incredulously. “I’ve put together some impressive deals in my time, but this thing you’ve pulled off – it’s just amazing! A Big and Tasty for $1? What’s your secret? How do you do it?”. Grimace, clearly scared shitless, blinks and swallows. The camera holds on him. The music swells. Suddenly, the crescendoing violin strings cut out. Donald Trump breaks into a smile, and nods, once. Without warning, the worst rock anthem you have ever heard begins blasting, and we cut away to an image of a heavily sexed up burger. “GOT A BUCK?” a shrill voice screams over the wailing guitars, “YOU’RE IN LUCK!”. A number of different burgers flash across the screen like the fever dreams of a starving child. The narrator, struggling to pitch his voice above the thundering drums and walloping bassline, informs us that the burgers we are seeing are – in turn – a “DELICIOUS BEEFY BIG AND TASTY”, a “MCCHICKEN SANDWICH” and “LOTS OF YOUR OTHER FAVOURITES”. Suddenly, we’re transported back to the Trump towers. Donald and Grimace stand side-by-side before a large glass window. They stare out into the mist-coated expanse of New York City, both silent, both brooding. “Together, you and me could own this town,” Trump whispers, wrapping one cold and cloying arm around Grimace’s shivering shoulder. Without warning, the ad cuts to black.

Thoughts: This hasn’t aged well. It only gets this far up the list because it’s depiction of the burgers – which is strongly and distressingly sexual – makes this just about the only advertisement actually concerned with promoting McDonald’s products.

Rating: Cheeseburger but the cheese is made of a patty, and the patty is made of bread, and the bread is made of a cheesy patty. And also Donald Trump is there, watching you eat and licking his lips.

The Ad: Grimace and Ronald wander through a storybook-esque cartoon world. The pair see Red Riding Hood, wander past the cat, the fiddle, and the dish that ran away with the spoon, and narrowly survive an encounter with a giant. But when things get dicey, Ronald decides to bail them both out. Cut to the exterior of a McDonald’s building. The pair are sharing a meal and laughing. “I always knew you loved happy endings!” says Ronald. Fade to black.

Thoughts: There’s absolutely no way that was an accident.

Rating: Big Mac at the end of a night out in town. Good, wholesome fun.

The Ad: It starts off innocently enough. Ronald McDonald, Grimace, and the Hamburglar share a table in a run-of-the-mill McDonalds. The Hamburglar places a tray of burgers on the empty table, and, being the absolute piece-of-shit human being he is, starts chowing into them without offering any to the other two. While the Hamburglar eats his way into a synthetic-patty-induced coma, Ronald McDonald and Grimace shit-talk him to his face. “I bet that fat fucking idiot wishes everything he touches would turn into cheeseburgers,” Ronald sneers, nodding towards the Hamburglar.* The Hamburglar suddenly sits up, scratching his face. “Cheeseburgers?” he wonders. We cut away to the Hamburglar running through a fucked-up alternate universe where daffodils are the size of cars and the sky is purple. The Hamburglar touches a daffodil and it turns into a cheeseburger. He touches an apple on a tree, and it turns into a cheeseburger too. Ecstatic, the Hamburglar runs towards Ronald and Grimace. “Don’t touch Grimace!” Ronald screams. The Hamburglar, stunned by Ronald’s outburst, accidentally touches his finger to his own cheek. Instantly, the Hamburglar’s face is transformed into a hideous, oozing, elephant-man-esque amalgamation of burger and face. “I touched my face!” he shrieks. Suddenly, we’re back at the table in McDonalds. In an M. Knight Shyamalan-level twist, it’s revealed that the entire second half of the ad only took place in the Hamburglar’s warped mind. Ronald McDonald leans across the table and shoves a filthy red-gloved finger into the Hamburglar’s pile of burgers. “You haven’t touched your cheeseburgers,” he gloats, winking, and the table bursts into raucous laughter. Cue music.

Thoughts: Jokes on you. This crack-addled, nightmare-inducing trainwreck of a child’s ad is an actual advertisement run by McDonald’s in 1984. Titled ‘The Hamburglar’s Touch’, it’s just about as disturbing as you would expect, given the title. This one takes the cake for the mere fact of its existence. How the fuck this got greenlit I will never know.

Rating: Texan BBQ with a steamed bun. Seriously, try it some time.