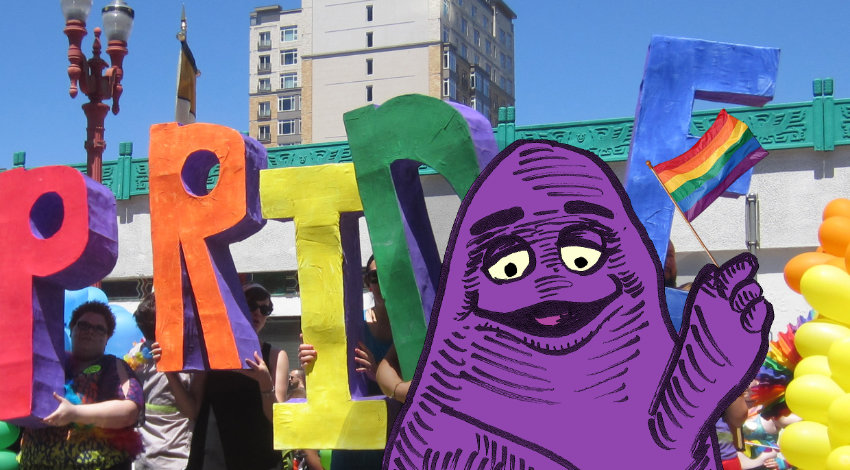 Sometimes we all commit to ideas that we think will work out well but in reality, are very hard to make come to fruition. Imagine a world where Grimace is a gay icon, then realize that this is the world we live in.

Madonna, Cher, Gaga, Pleakley from Lilo & Stitch, RuPaul, Grimace. What do all these names have in common; they’re all fierce, strong and beloved gay icons. Grimace is a gay icon. He’s here, he’s queer, get used to it. A Gay Icon is defined by Wikipedia as “a public figure who is embraced by many within the LGBT+ community”. Grimace is both a public figure and in my mind, wholeheartedly embraced by those in the LGBTQ+ community, not only for his tireless behind-the-scenes – and often extremely subtle – activism, but also for his support and advocacy to gays. Because regardless of your gender, ethnicity or creed we can all admit that Maccy D’s at the end of the night is a pure treat and Maccy D’s is nothing without some sweet sweet Grimace. Some may just describe Grimace as Ronald McDonald’s gay best friend, but Grimace is so much more than that; he is a gay icon.

According to Wikipedia, a gay icon must embody four main qualities in order to be perceived as a gay icon, these qualities are: Glamour, Flamboyance, Strength through adversity and Androgyny in presentation. These are the truths that Grimace lives, these are the fundamentals of his being, the essence of Grimace.

In 2018, Pantone announced the colour of the year was ‘Ultra Violet’. Purple is en vogue and Grimace maintains this purple tone for its chic high class glamour. It is an effortless choice on his behalf – he was simply born this way. Whilst many would consider it tasteless and ill-considered accessorising, Grimace keeps it clean, he keeps it tight, his look is timeless and elegant. Purple is the colour of royalty, and Grimace is no different.

Just remember all the glamour that Grimace showed. The time when he danced with John Travolta at the White House, his iconic white look when he met with Hillary Clinton to discuss landmines, or his timeless looks when spotted out with Dodi Fayed in Paris. Dodi died, but Grimace lives, his glamour continuing to survive many a decade and this is unlikely to change.

Grimace is flamboyant. I think it was the great (let’s forget All Stars 4 please) drag queen Latrice Royale who once described herself as “large and in charge, chunky yet funky”. These are the words that Grimace lives by. He has never felt a need to change his look to suit the tastes of others – he’s the taste people come for. His strong personality attracts attention. Take his Purple for Poppers Celebration every Oscars Night, always the hottest night of the social calendar.  He is confident, he is bold, he expresses himself. Flamboyance is not a show for Grimace, he is he who he is.

Grimace’s struggles with his evil side are well documented, he has had his demons, he has struggled, he has embraced himself and bettered himself and Grimace stands alongside the queer community as a strong supporter and advocate. On the Rainbow Flag, Purple signifies Spirit, fitting for a creature with as much spirit as Grimace. Strength through adversity takes courage, perseverance and persistence and throughout all the struggles that Grimace faces, he is a strong advocate and ally. After all, what else could one expect from the taste bud (or milkshake blob?) that threw the first Big Mac™?

Although ‘he’ prounouns are preferred, Grimace appears androgynous. I mean look at him, you can’t exactly say what he is let alone what gender he is just from appearance. And he likes it that way. His collaboration with MAC Cosmetics has given him the tools to further contour his appearance in a way that confuses yet excites those who see him. The Annie Lennox of the McDonald’s universe, Grimace is a pioneer in androgyny. David Bowie actually took lessons from Grimace – not his sexual habits, luckily. Grimace is beyond reproach.

A new exhibition “Grimace: The Tasteful Tastebud”, hosted by Naomi Campbell, is opening at the New York Metropolitan Museum this month where Grimace’s fashion is displayed alongside his life work.