A Love Letter to Fallout…. Or at least New Vegas 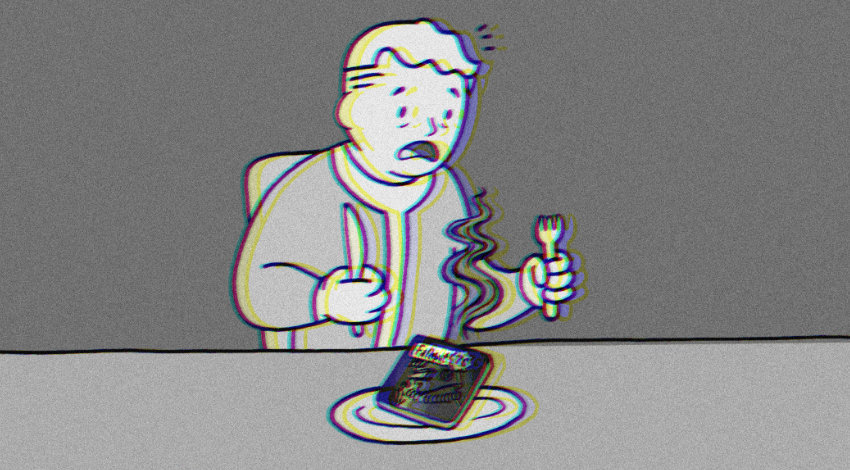 Fallout, as a franchise, has come under thermonuclear heat in the last few years. It’s a discussion that draws ire from across all the gaming spheres – if you’re a self-described gamer (or gaymer), you likely have some.. strong views on the topic.

It’s a franchise that has existed for over two decades – it has gone from a pixelated RPG with endearing glitches to, well, a pixelated FPS with not-so endearing glitches. And with that change, much has been gained, but so much has been lost. However, it’s easy to forget why the games get people so mad to begin with, in amongst all the furore. It’s easy to forget that the franchise was once not solely a byword for Bethesda’s laziness. I want to talk about the love at the heart of it all.

Fallout 76 was disappointing for a few reasons, chief amongst the Fonterra-farms-in-our-rivers levels of shit was that it was nigh unplayable. That’s not a mocking criticism of Bethesda’s coding team consisting of three chimpanzees wiping their leafy fecal matter on the keyboards, I mean that it was literally unplayable. In this case, the game had elevated Bethesda’s high art of glitchery to its logical conclusion: the game would encounter a bug that would uninstall the entire thing in seconds. All 97 gigabytes of it. While gamers – avatars of Beelzebub – aren’t known for their patience, you could hardly blame them for their fury. In chasing the battle royale fad, a fad i personally have no problem with if done right, Bethesda had gone too far, it was argued. The hallmarks of the franchise were non-existent – “there weren’t even NPCs, bro!” This sparked a discussion about what depths of the abyss Fallout was plunging into, like Frollo clinging to the living gargoyle – should Todd Howard be hanged, could the franchise be saved from itself, was it worth saving, etc. And thankfully, I do have an answer to that last one. The answer? New Vegas, baby.

I hold no pretences that I am an unashamed evangelical force for this game. Like the Jehovah’s Witnesses outside Albert Park, I will always be there. Waiting without slumber for you to find the gospel I have neatly prepared. For those who might not have played it, Fallout: New Vegas represents the storytelling pinnacle of the franchise. Set in the Mojave Desert, you are the Courier. You’re making a very important delivery, but suddenly, Matthew Perry ambushes you and shoots you down. The dialogue in this scene is as famous as the game itself. Naturally, however, the bullet to the skull doesn’t take. When you wake from your slumber, you are thrust into a world that does not echo the Fallout of old; contrary to the radioactive sheen of bleakness that Fallout 3’s palette consisted of, the colours of the Mojave are decidedly more optimistic. Life has actually progressed, and something resembling a sprawling civilisation has climbed out of the ruins of Nevada and Arizona. Also, Easy Pete the prospector is there. After all these years, the world of Fallout has come to understand that just because the world after the bombs fell is miserable, it doesn’t mean everyone else has to be. It’s New Vegas, baby, and you’re about to roll the dice.

Two things should be mentioned: the game is notoriously buggy, even after a near-decade of modding going into it since its 2010 release. So while it was made by Obsidian, the studio key to the success of Fallout 1 & 2 in the late ‘90s, they were still hamstrung by a 12 month development cycle – Bethesda did not want it to coincide with the release of Skyrim in 2011. In that sense, it is still a child of Bethesda, for it shares the quality of limitless glitchery shared by all its other properties. But while it is Bethesda’s baby-in-a-basket, dropped on the orphanage steps, the heart and soul of game belong to Obsidian. And indeed, the heart and soul of the franchise belongs to Obsidian – for what makes New Vegas so beloved, and has been at the root of the endless grumbling about the franchise since Fallout 4 came out in 2015, is that it knows its universe.

There’s a level of care to the passage of time and the narrative that has sprung out of the radiated earth that is simply not present in the Bethesda-directed games. Instead of ‘good guy good bad guy bad kill stab save Earth get pussy’, you have a nuanced morality scheme for the Courier to choose from. Side with an imperialist remnant of old America, or shoot to the stars with Legally-distinct-Howard Hughes/Walt Disney? Or will you choose an independent path for Vegas? Instead of ‘gun gun shoot kill murder kill gun explosion boom’ as the only options, it is possible to not take a life in New Vegas. One can argue the point of pacifism when a violently misogynistic reincarnation of one man’s perception of the Roman army is bearing down on the Hoover Dam, but that’s the beauty of the game; the ability to justify one’s mindset with reflexive gameplay, something completely missing in 4. That’s not to say that I don’t go full katana-swinging meth-addled murderer without provocation in most of my playthroughs, but the choice is still there. Due to the near-impossible development time, the game unfortunately has a lot of missing content that would have given you much more incentive to choose between ‘the good guys’ and ‘the bad guys’, with the Romans not getting much in the way of content to support their overwhelming dialogue presence in the game. The companions, however, are not lacking in variety. You could choose to fight the Deathclaws with Lily, the schizophrenic mutant grandmother with just the sweetest disposition out there. Or you could kill Caesar with Arcade, the endearing Gay Twink Doctor. Or kill Caesar with Boone, the Stoic Bald Army Guy (who I adore). Most of all, I would die for ED-E, the floating Eyebot. They would kill Caesar without a second thought, all because I wanted it. And there are like eight more you could choose from.

Ultimately, New Vegas represents a time in the franchise where it had aspirations. While Bethesda and Todd Howard aren’t the devil incarnate, their laziness in chasing the lowest common denominator is apparent. New Vegas represents an era where Fallout was not just a logo, but a sincere belief in what humanity could rise to – or sink to. We just had to play and make the choice for ourselves. While Bethesda has to be given credit for revitalising the franchise, it has become a drunken step-mother that has all the money, no love for you, and your dead daddy can’t help you any more. We have a game that is so unstable in its identity that it would rather delete itself than allow the player to be sullied by its uselessness.

Almost makes you wish for a nuclear winter.