Anti-Vaxxers, Pre-Med and those darn red spots: Why you should grow the fuck up and get vaccinated 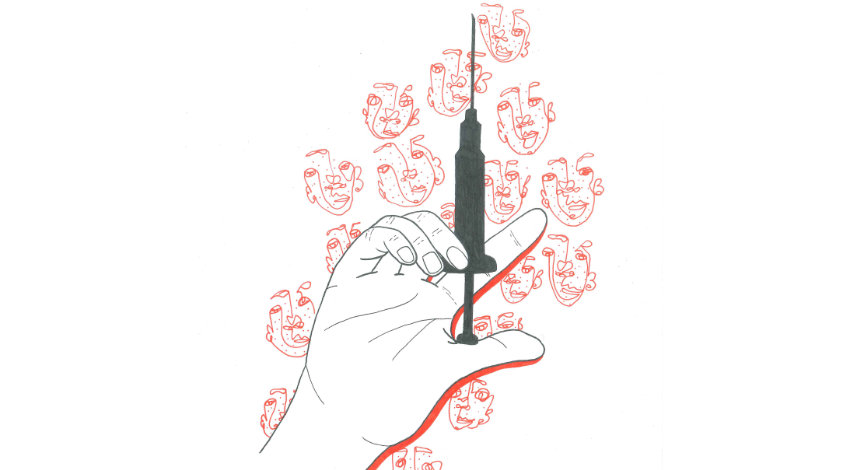 Cameron Leakey is sick of the bullshit around vaccinations – Measles was once a practically eradicated disease and now it’s back with a vengence, what the fuck.  This week, he actually does some research, gives you the 411 and speaks to staff at the Immunisation Advisory Centre to find out more about Measles and Vaccinations.

Several weeks ago, news broke that for the second time this year, Measles had been reported at UoA. This time, the culprit was a student (or students) in BIOSCI 101, BIOSCI 106, CHEM 110, COMPSCI 110, MEDSCI 142, MEDSCI 206 and PHYSICS 160. Now, when I heard those papers, I was relieved. Firstly, I abandoned my science degree after my first year (thank fuck) and so I was unlikely to have crossed paths with some infectious first year. Secondly, because I AM VACCINATED. Being vaccinated is like wearing armour. It’s like fucking with a condom on. This shit keeps you protected! But the news of Measles outbreak is still extremely frustrating to me because unlike many other debilitating or possibly threatening diseases (Remember our old friend, Ebola?) where there is no cure or limited treatment options, Measles can for the most part be prevented – if not eradicated – so why the fuck is this still happening?

Cameron Leakey (Excellent Question Asker): Why should we be concerned about the growing prevalence of Measles in Auckland?

Theo Brandt (Knowledgeable on Vaccines and Communications Manager at the Immunisation Advisory Centre (Bsc (Hons)) : Measles is one of the most contagious diseases we know of. For those of you doing a science degree it has a R0 of between 12 and 18. For those who aren’t: if you have measles you will potentially pass it on to 12 to 18 more people. This is a concern because if you’re not immune to measles, it becomes much more likely you’ll catch it… and pass it on to others – and you’re contagious before you even know you have it.

Cameron: Why are people choosing to not get vaccinated?

Theo: It isn’t necessarily people choosing not to be vaccinated. You might just be too young to have the MMR (Measles mumps rubella containing) vaccine. You get the first one when you’re 15 months old, the second at 4 years of age. Historically NZ had actually very low immunisation coverage, mostly due to us not putting enough effort into effective systematic ways to offer immunisations, so many adults are unaware they are not vaccinated or only partially vaccinated.  VTNZ has been sending reminders to get my WoF renewed but it took our health services a long time to figure out simple effective approaches such as that! Then there was a very dodgy piece of research in the 1990s that claimed there was a link between the MMR vaccine and autism. That research was complete rubbish, was retracted by the journal and the author, Andrew Wakefield, barred from practising medicine in the UK  because of his unethical approach to research. But because of his claims, many parents didn’t vaccinate their kids with the MMR vaccine at the time. So there’s a cohort of 20 to 30 year olds that aren’t vaccinated against measles, but might not know it.

Wikipedia calls it ‘Vaccine hesitancy’ – the idea that an individual may be reluctant or refuse to vaccinate themselves or their children. The World Health Organisation identified Vaccine Hesitancy as a top ten global health threat in 2019.  There are many virulent strains of Anti-Vaccination reasonings. There is the widespread myth that MMR causes Autism – which it does not.  Then there’s the drama around Thiomersal – the antifungal preservative that was present in many vaccines previously. This compound contains Mercury, a substance which can be generally harmful in high doses. To limit any potential worry about this compound, it was removed in most vaccinations (except the Influenza vaccine). Even then, this vaccine compound is widely recognised to be safe. The idea of ‘Vaccine Overload ‘ – or giving too many vaccinations for a child’s immune system – is recognised as a miseducated idea. Vaccines present a small load on the immune system compared to the pathogens a child would encounter in a year naturally. I even knew of someone personally  who said they wanted their children “to develop their own immunity naturally”. This idea is bullshit with the knowledge that vaccine preventable diseases don’t give two shits about how strong your immunity is – they find an in-road and they overrun. You then risk ongoing health complications, spreading a preventable disease further let alone the possibility of hospitalisation from these illnesses.

Cameron: What can we do to educate students on why vaccination is important?

Theo: Immunisation is a victim of its own success, we don’t often see these preventable diseases because vaccines do such a good job of helping protect us. So educating people in the absence of disease can be hard. What we can say is that the risks from preventable diseases like measles or whooping cough are much worse than the very small risk of having a vaccine. The best education could be to understand the  tragic but avoidable outcomes of these diseases. Roald Dahl, the famous author, wrote about losing his daughter to measles in the 1960s, it’s a powerful story. Despite all the advances in modern medicine, preventable diseases can’t be cured, just managed and there’s no guaranteed outcome.

Theo: It is a mild disease for many, but very serious and even life-threatening for some. Complications from measles include ear infections, diarrhoea, pneumonia, brain inflammation, hospitalisation, death, and degenerative brain disease leading to death. Measles during pregnancy also increases the risk of miscarriage or premature birth. In 1991 during the last major outbreak, seven people died. In this current outbreak a bit over 40% of those infected have ended up in hospital. And for infants the proportion is even higher. I think any parent with their child in hospital wouldn’t see measles as being ‘not that bad’. The other thing about measles is that it effectively wipes out a fair bit  of your immune memory for other diseases as well , so you tend to get other nasty diseases in the months following, when recovering from measles.

So if you’re reading this (and by this stage in the article you might be skimming it so I’ll put it in big letters) and think:

MY PARENTS DIDN’T VACCINATE ME AND I WANT THE SWEET RELIEF OF VACCINATION: WHAT DO I DO?

Cameron: Can students get vaccinated without their parents knowing? and where?

Theo: When aged 16 yrs and older, they are able to make their own decision. Even children aged under 16 years have the right to give consent for minor treatment including immunisation, providing they understand the risks and benefits involved. Any GP or clinic will provide free MMR vaccination if you haven’t already had it. If you don’t have any record of having a measles- containing vaccine then it is completely safe to have some more. Some people can’t have the vaccine, including those pregnant, or with a severe problem with your immune system or taking immunosuppressive drugs.

And as for those first year students struggling with the stress of trying to get clinical, who are scared of Measles or considering biological warfare as a way to climb those ranks to get an interview:

Cameron: Should we be in a panic about measles? Face masks, hand sanitisers, isolation and all?

Theo: No panic needed- just make sure you’re up to date with your MMR vaccination. The vaccine is highly protective. After the first dose of MMR vaccine, 90–95% of people will be protected against measles, i.e. 5–10 people out of every 100 immunised could still get measles. After the second dose almost everyone is protected. If you are having the vaccine for the first time, it will take up to two weeks to become effective, so avoiding Shads for a week or so might be advisable.

Lastly, the best advice to prevent Measles: it’s not crystals, not voodoo, and it doesn’t involve such insane amounts of Vitamin C that you shit yourself.

Cameron: What is the best advice you have for students to prevent getting Measles?

Simple message, team: go out there and vaccinate yourself.