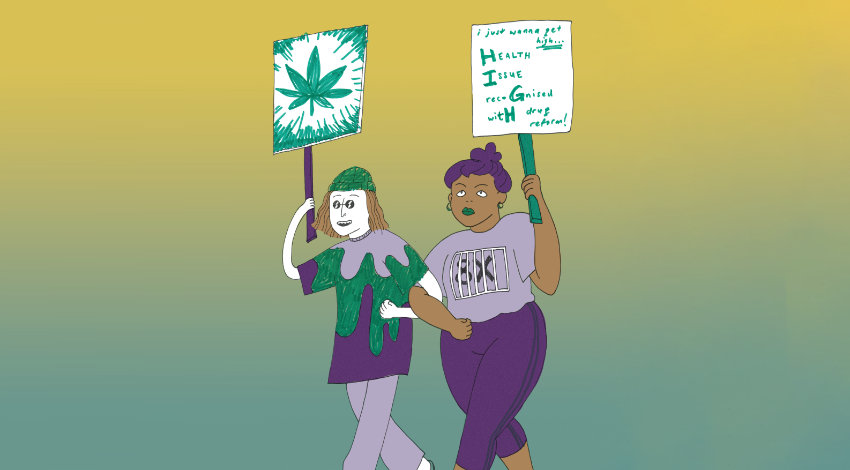 On a Monday night in the Auckland Town Hall, people from all walks of life came together to connect over drug policy in Aotearoa. Though the Cannabis Referendum is 14 months away, it’s at the forefront of many Kiwi minds; from watching Patrick Gower get high in his documentary, to debating the topic with friends and family around the dinner table.

We are starting to realise those who participate in the umbrella term of “drug use” are not in a specific degenerate sector of society that we can easily pathologize and demonise. By the age of 21, 80% of Kiwis will have tried cannabis at least once. However, from 2007-2011, 1050 people were arrested for involvement with cannabis. The Unify Rally, created by a new drug reform campaign #HealthNotHandcuffs, shines a light on not only problematic and archaic drug policy in Aotearoa, but how drug policy globally is founded on institutional and systemic racism. The War on Drugs, which undoubtedly has failed, was used as a means of social and racial control, framing drug use as a criminal issue instead of a health issue.

Along with encouraging those at the rally to vote for change and help the referendum gain momentum over the coming months, the speakers spoke about how drug policy around the world works to oppress certain groups, whilst benefiting those who make the laws.  By decriminalizing and regulating drugs like cannabis, social harm is reduced and people do not fall victim to a system they are powerless in. A notable speaker was activist, mother and award-winning author Asha Bandele, known for writing “When They Call You a Terrorist: A Black Lives Matter Memoir”. She spoke candidly and passionately about the death of her son from drug violence, and the devastating effects caused not by drugs themselves, but by the policing and treatment of those who use drugs. The U.S government seems more than willing to spend thousands of dollars locking someone up in a cell, marking them with a criminal record, and watching them fall deep into a pit of recurring violence, poverty, and disenfranchisement. As Asha said “You can’t get well in a cell.”  Instead of criminalisation for non-violent and non-problematic drug use, racial disparity in prisons, and the deepening of divides in our society, we need to create a world where knowledge and empathy are prioritised over judgement and a racist punitive system.

In New Zealand, 15% of the population are Maori. In prison, 51% are. In the United States of America, 13% of the population are African American. In prison, 40% are. We can’t ignore the statistics. Black men in America serve almost as much time in prison for non-violent drug offenses than white men do for violent crimes. Many people like to view those who are drug users, or those who are in prison as lacking moral standing, defining them as deviants who should be treated with no mercy. Even scrolling through your Facebook newsfeed, there are numerous comments on videos about harm reduction or drug use, saying that drug addicts should be shot, and that they are scum. Bryan Stevenson, author of Just Mercy said “But simply punishing the broken-walking away from them or hiding them from sight… only ensures that they remain broken and we do, too.” We want to create these stark divides because it makes us feel safer and puts us at a distance from those who we deem as the undesirables in society. The advertising campaign created in the 1980’s “Just Say No” has painted drugs as a simple issue with a simple solution. This is not true. Deborah Small, another speaker at the Unify Rally who is an American lawyer and drug reform advocate, says that instead of “Just Say No”, we should be saying “Just Say Know”. Harm is reduced through education. Harm is reduced through open dialogue, and by breaking down stigma and shame. Harm is reduced by acknowledging that colonialism has sunk its teeth into every facet of the way we live and function in this country. Portugal has been used a shining example in the dialogue surrounding drug policy as a country that decriminalised all drugs, with overwhelmingly positive results. The opioid epidemic where 1 in 10 people were addicted to heroin became stable, overdoses declined, and HIV and Hepatitis rates decreased. New Zealand has an opportunity to join countries like Canada, legalising cannabis and adopting progressive views on drug policy. We can look back on history and positively say that the old way of doing things doesn’t work. Criminalising drug use is more damaging than drug use itself. We can see that in America with the opioid epidemic, where people get hooked on prescription drugs and then have to resort to illegal substances like heroin and fentanyl, putting them at risk of overdose and diseases like HIV. Every country has their own unique problems with drug policy, but at the Unify Rally we could all see clearly that in every country, there were people in society, usually people of colour, who were consistently facing the worst consequences and outcomes.

Leaving the Unify Rally on that Monday night, you couldn’t help but feel exactly that. Unified. When we vote, we can come together to challenge a past system that has left us powerless. We need to choose health over handcuffs, for everyone’s best interests.