The Tragedy of Jeremy Kyle the Callous 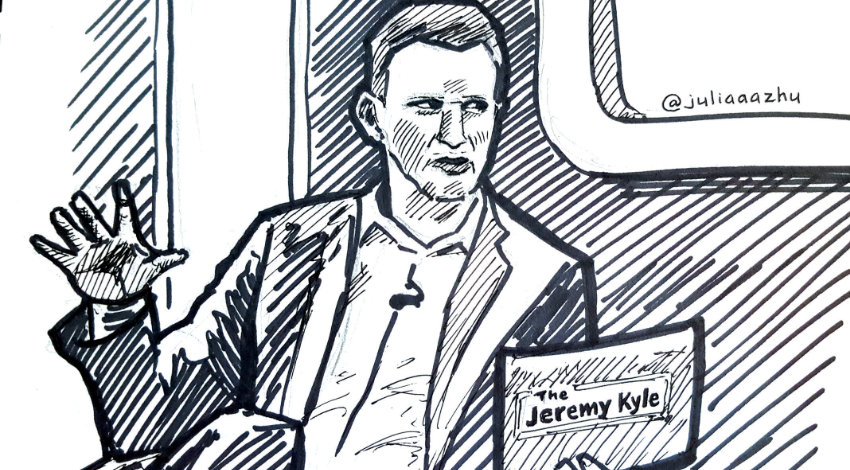 In May this year, a guest on The Jeremy Kyle Show tragically killed themselves after failing a lie detector test on the show – ITV immediately cancelled the show after massive uproar, and has summarily scrubbed Jeremy Kyle’s existence from its platforms and the internet as a whole. As Jeremy Kyle would say – I’m not ‘aving a go at you mate, but it sounds like yer killed the guy, eh? Fuckin’ disgrace.

On a long-term level, however, the callousness of the show shone a light on the decline of a genre that barely exists in its classic form today: the point-and-laugh talk show. It was the bread and butter of reality television for at least a decade, the genre that kept the industry’s lights on and rents paid during its early years. Things have changed, however. I’ll talk about that soon. Right now, I’m talking about the classic form. I mean Jerry Springer, Ricki Lake, Maury Povich, and I mean Oprah. The shows where you would bring uneducated hillbilly fucks on stage and mock them for being poor and uneducated, or hiss and boo at a deviant ho-mo-sex-ual. And they they’d fight and throw chairs! Such an enlightened era.

But reality television has come a long way, and in some formats cum a long way, since The Real World premiered on MTV in 1990. However, while MTV really crystalised what reality TV would become, it was the point-and-laugh talk show that first proved what a ratings success ‘reality’ could be. And while Oprah had many forebears, such as Phil Donahue, it was O herself that really gave the reality genre a leg up, before she whisked herself away to the land of exclusive interviews, book clubs and giving the platform to anti-vaxxers.Thanks, Oprah! Fuck off! In all the glory surrounding her unmatched success and respectability, it is often forgotten that the first decade of her show was essentially point-and-laugh with the veneer of a social conscience, parading around Klan members and #lesbians, and the audience forgetting that they, like, voted for Reagan, lol. And it was this era that ushered in the point-and-laugh talk show that would be wildly successful for well over two decades.

However, while Maury  – essentially Jeremy Kyle’s American twin – still exists, it is the last of its kind. Something happened along the way, something just stopped clicking with the average viewer. The genre was in an existential crisis, faced with the reality of age and an industry with far more variety than the classic point-and-laugh talk show could compete with. Survivor was still in its early-ish years of ratings supremacy, Flavor of Love was already legendary, and people had also started thinking that gays were maybe people, which took away the bite of half their episodes. And more to the point, viewers started realising that hmm, maybe this was a rather mean format! And just to be clear, I’m no hypocrite. I watched Jeremy Kyle on many a morning. But nonetheless, viewers for these shows slowly started dropping off in the late ‘00s, and even Jerry Springer fell off the air. That is not dead which can eternal lie. And with strange aeons even Jerry Springer may die. What had happened?

To put it simply, the genre had evolved and diverged. After the decade’s financial crisis, a significant number of people were worse off, and had come to a rather startling realisation: how can I laugh at poor person if I am poor person? The steady rise of shows like Dr. Phil and the unmatched presence of Judge Judy pointed to a new turn in the point-and-laugh genre, not unlike Oprah decades earlier: if you were gonna laugh at people and revel in their stupidity and their misery, they needed to be taught a lesson at the same time. Or, they needed to be teaching you a lesson. Plot twist! Dr. Phil in particular has gotten this down to a masterclass, in which he can bring some precocious teen mother out on stage and lecture her for her mistakes, and then twist the knife on the audience by saying ‘Now uh, ah think this young lady has uh shown some real grace in uh, listening to me and getting some uh, real help. She may be poor and stupid, but ah think she’s a real gem, as glistenin’ as my bald head. (audience laughs) What about you?’ It allows the show to sell itself a veneer of conscience, by pretending that it cares about the plight of ol’ Mary Anne McCormick or whoever the fuck, and letting you get your laughs in with a smile. As I said, I’m no hypocrite, I’ve partaken in this too. Most of us have! Catfish is an even better example of this, as Nature’s embodiment of the gas station, Nev Schulman, has mastered the ‘Oh, that sucks’ sad eyes, while pressuring them to cry for the audience, and getting handheld camera closeups of their poor dental hygiene for us all to remark at.

But perhaps the biggest knife in the classic genre’s back, the other half of the split, was the focus on shows that revel in their callousness, and make it very clear there are no lessons to be taken, or at least, no lessons you need to concern yourself with. Even if the participants in the show don’t realise they are the joke, i.e Real Housewives of Whatever I Don’t Know, the audience knows and the advertisers know, so production frames them that way. These sorts of shows capture viewer figures in a way that the half-and-half sorta-callous sorta-’helpful’ point-and-laugh talk show just never could, without being burdened by the necessity of pretending there’s any sense of decency to take from it all.

In a media landscape where Jeremy Kyle was being out-Jeremy’d on every front, it was a surprise that he managed to last until 2019, only felled by his own sword as opposed to dropping viewer numbers. If he outlasted Maury, he could have been the Highlander: immortal, and the sole survivor of his kind. He was still super popular, almost an institution by the time he was cancelled. Maybe it was because of Jeremy’s almost unique placement in today’s landscape, that it was almost a novelty to be such a throwback to a time where you could mathematically calculate the number of bleeped out swears and slurs relative to the participant’s missing teeth. The lie detectors, legally inadmissable pseudo-science, are so rare in today’s landscape. There was a level of nostalgia that kept Jeremy Kyle thriving, Ra’s Al Ghul sucking on the teat of the Lazarus Pit.

But there are always consequences, and like the now-forgotten Jenny Jones Show of the ‘90s, pitting angry, frightened people against hordes of unempathetic, jeering viewers can have disastrous consequences. In 1995, Scott Amedure was murdered by Jonathan Schmitz, after Jones revealed that Amedure had a crush on Schmitz. Once the cameras stopped rolling, Schmitz stalked Amedure down and killed him. The show still went on for another six years. In contrast, Jeremy Kyle was taken off the air immediately, and scrubbed from memory. The situations are entirely different, but nowadays, we won’t tolerate the consequences of that kind of suffering. Just the causes leading up to them.